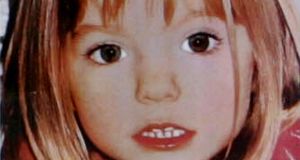 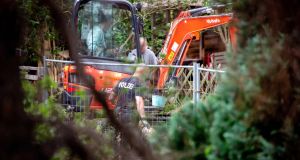 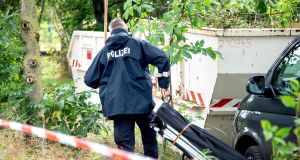 A police officer at the site in Hanover. Photograph: Hauke-Christian Dittrich/AFP via Getty Images

German investigators are to continue on Wednesday their search of a garden allotment near Hanover as part of their investigation into a man suspected of kidnapping British girl Madeleine McCann.

Early on Tuesday police cordoned off the allotment, 3km outside the Lower Saxon capital. Over several hours, trees were felled and a red mechanical digger could be seen moving earth, which was bagged by forensic investigators.

Investigators declined to discuss details of the operation, including the use of sniffer dogs, with journalists at the scene. A spokeswoman for the prosecutor’s office in nearby Braunschweig confirmed the search was being overseen by the same team that secured a rape conviction against the suspect last year. They would “still need some more time to finish” their investigation on Wednesday.

“I can confirm that the search is being carried out in connection with our investigations into the Maddie McCann case,” the spokeswoman added.

The allotment is believed to be near where the 43-year-old suspect lived in a caravan while working at a car repair shop. In 2007 he divided his time between Germany and longer periods on the same stretch of Portuguese coast that the McCann family visited. There he financed his lifestyle working as a handyman and drug dealer.

Last month German police identified the man, a Bavarian-born drifter and convicted sex offender, as a chief suspect in the McCann case and expressed doubt that the girl was still alive.

German police say that on the 10th anniversary of her disappearance in 2017, a friend of the man approached them to say he had claimed to “know all about” the fate of the three-year-old girl. Three years of undercover work followed before police went public with their suspicions in June. Among circumstantial evidence is a 30-minute phone call between the suspect and an unknown person just before the girl vanished.

German investigators believe the suspect may have broken into the McCann apartment in the Ocean Club complex on the Algarve as Madeleine’s parents, Gerry and Kate McCann, ate at a nearby restaurant, and that a planned burglary turned into a spontaneous kidnapping.

The man had a transient lifestyle on the Algarve coast between 1995 and 2007, but mostly was located near the Praia da Luz resort where the girl went missing.

He is serving a seven-year sentence, handed down last December, for raping a 72-year-old American woman in Praia da Luz in 2005, 18 months before Madeleine McCann disappeared in the same town.

Police released the numbers of the phones involved in the case and have posted a €10,000 reward to information that leads to a conviction.

German prosecutors say they have “concrete” but not “forensic” evidence that Madeleine was killed by the suspect, but have yet to interview him.

On Tuesday his lawyer confirmed he had withdrawn an application for the early release of his client on the drug charge and would not comment on the McCann case until seeing prosecution files.