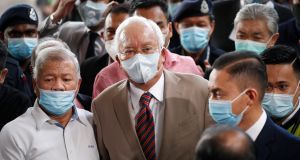 Malaysia’s former prime minister Najib Razak has been found guilty of all seven charges in his first trial linked to the multibillion-dollar 1MDB scandal – a landmark conviction that means he now faces 12 years in jail.

Najib has denied any wrongdoing in relation to what is one of the world’s biggest financial frauds, in which billions of dollars were allegedly looted from a state fund set up to promote development. The scandal shook Malaysian politics, led to the ousting of Najib’s Umno party after 61 years in power, and prompted a series of investigations in countries around the world.

On Tuesday morning, almost 16 months since the start of the trial, Kuala Lumpur high court judge Mohamad Nazlan Mohamad Ghazali sentenced Najib to 12 years in prison and a fine of 210 million ringgit (€42 million).

“After considering all evidence in this trial, I find that the prosecution has successfully proven its case beyond a reasonable doubt,” he told the court. The court allowed a stay of the jail sentence and fine, which means Najib will not be sent to prison immediately.

Najib, whose legal team had sought to delay the sentencing, asked for leniency. Speaking from the dock, he told of his successes as a leader and swore that he wasn’t aware of vast funds that had been transferred into his account.

Dr Muhammad Mohan, president of Transparency International Malaysia, welcomed the verdict, which he said would “boost confidence in the judiciary system and rule of law” for many. But he added: “There could be a group who feel that, because [Najib] can appeal, anything can happen.”

Writing on Facebook on Monday evening, Najib vowed to fight a possible guilty verdict: “From day one, I have said this is the chance for me to clear my name ... Whatever the decision in the high court tomorrow, it does not end here ... after this, we will go to the court of appeal. I am ready.”

During the trial, the court heard of Najib’s lavish spending sprees, including how, on one occasion, he spent £620,000 at a jeweller in Italy in a single day and, months later£84,000 at a Chanel boutique in Hawaii.

Najib defended the credit card spending as purchases for official purposes. He had pleaded not guilty to criminal breach of trust, money laundering and abuse of power.

Najib testified that he was misled by the Malaysian financier Jho Low and other 1MDB officials into believing the funds had been donated by the Saudi royal family and not misappropriated from SRC, as prosecutors allege. Saudi Arabia’s foreign minister said in 2016 the funds were “a genuine donation”, but the government has not commented on the case since. Low denies any wrongdoing.

The judgment has major implications for the Malaysia’s leadership. Less than two years after being removed from government over the corruption scandal, Najib’s Umno party returned to power again in March, through an alliance led by the prime minister, Muhyiddin Yassin. Some have questioned whether this change in leadership would have ramifications for ongoing corruption cases.

A not-guilty verdict could have paved the way for Najib to run again for office. The conviction, however, could weaken Mr Muhyiddin’s coalition, which depends on Umno for support.

Despite Tuesday’s verdict, Najib is likely to continue to play a role in politics from behind the scenes.

The US justice department believes that in total more than £3.5 billion was stolen from the 1MDB fund and laundered by Najib’s associates. More than £540 million from the fund allegedly landed in Najib’s bank accounts. Najib’s wife and several officials from his party and previous government have also been charged with graft. They deny any wrongdoing.

Mr Muhyiddin has said he will introduce anti-corruption reforms. A recent decision to drop charges against Najib’s stepson, Riza Aziz, the producer of The Wolf of Wall Street, in a settlement deal, has been criticised by activists.