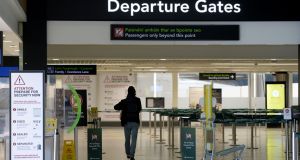 A plummet in traffic at Dublin and Cork airports has led to losses of €100m to date at the DAA. Photograph: Alan Betson / The Irish Times

Aer Lingus is in talks with workers on job losses at the airline, its chief executive, Sean Doyle, confirmed to TDs and senators on Tuesday.

Responding to fears that Aer Lingus could be wound up, Mr Doyle told the Oireachtas Special Committee on Covid-19 Response, that the company was in consultations with workers and their representatives.

The airline has already formally told the Government that it could have to seek up to 500 redundancies from its 4,500 workers.

Mr Doyle said that Aer Lingus continued to communicate with workers and would tell staff first of any new developments.

Trade union leaders last week said they feared that Aer Lingus could be wound up if Government travel restrictions remained while the carrier, and other Irish airlines, received no aid outside wage subsidies.

Mr Doyle told committee member, Labour TD Roisín Shortall, that Aer Lingus was working hard to come through the crisis, along with British Airways and Iberia, the other carriers within International Consolidated Airlines Group.

“If you enact the recommendations of the aviation task force, then coupled with what we are doing ourselves, Aer Lingus will have a future when all this is over,” he said.

Those recommendations included lifting travel restrictions such as the 14-day quarantine imposed on passengers travelling into the Republic.

Eddie Wilson, chief executive of Ryanair DAC, the airline group’s biggest carrier, called on the Government to add the EU 27 and UK to its green list of countries for safe travel.

Mr Wilson warned that unless the Republic began opening up to air travel, it would suffer structural damage to its economy within six months. “That will take years to repair,” he said.

Both he and Mr Doyle pointed out that the State was the only EU member to persist with travel restrictions.

All others have opened up, following protocols recommended by the European Union Aviation Safety Authority and European Centre for Disease Control.

Covid-19 travel restrictions have cost Dublin and Cork airports a total of €100 million to date, according to DAA, the State company responsible for both.

Ray Gray, DAA’s chief financial officer, told the committee that around 15,000 passengers a day are passing through Dublin Airport, compared with 110,000 to 120,000 normally.

There are around 200 flights in and out of Dublin Airport every day at the moment, one third of the 600 that it would usually expect. “Just 30 per cent of those aircraft are full,” Mr Gray added.

The company expects traffic at Dublin Airport to reach around 20 million next year, down from 33 million in 2019.

He told the committee that DAA continues to talk to airlines about their current and future plans in light of the pandemic and the State’s response to it. “Airlines are putting back their plans to add new capacity,” he said.

Around two thirds of DAA’s 3,500 workers now depending on Government wage subsidies. Mr Gray acknowledged that this is aiding the company in managing its costs.

“It is not our practice to deal with our staff disrespectfully or to push them out of the business,” he said.

“If those people want to change course or do things differently we are seeking to engage with them on a voluntary basis.”

Asked if Shannon Airport should be returned to DAA’s management – the pair split in 2013 – Mr Gray did not comment beyond saying that the company would implement State policy.

“Since the separation of the airports, we have seen passengers growing at the airport and seen investment in the portfolio of Shannon Group properties,” she told the committee.

Ms Considine added that the number of aviation companies based at Shannon had doubled in that time to 80.

Trade union Siptu last week argued that Shannon should be returned to DAA’s management as its independence had failed.