Questions and Answers: why is Germany’s coalition under threat?

The border question in Germany remains unresolved since the refugee crisis 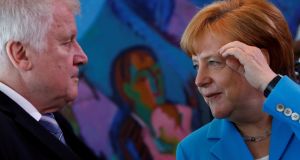 German chancellor Angela Merkel and interior minister Horst Seehofer. If Mr Seehofer pushes through his tighter asylum rules as promised on Monday that will force Dr Merkel to fire him

Why is Angela Merkel’s coalition at the brink?

Her Bavarian allies, the Christian Social Union (CSU), face state elections in October, and it believes its absolute majority hinges on the border question, unresolved since the refugee crisis. Germany has reintroduced border checks, but border police have been instructed to allow in people without papers who want to file for asylum. CSU leader Horst Seehofer, the federal interior minister, dismisses this as “asylum tourism”. Against Merkel’s wishes he wants to turn back those registered elsewhere in the EU or who have arrived from another EU country: a stricter reading of the EU’s “Dublin Rules” where the country of entry into the bloc is responsible.

Germany has reintroduced border controls, and in 2017 refused entry to 17,000 people. But Bavaria points to France, which turned back over 80,000 people last year. German legal experts disagree on whether national or European law has precedence, in particular whether a state is obliged to accept and examine every asylum application. In Germany an asylum applicant can challenge their rejected application in the courts, and after six month if the person is still in Germany the country is responsible for them.

What does Merkel want?

She wants tighter controls on external borders and fairer redistribution within the bloc. After her unilateral decision in 2015, she fears another such move from Berlin now could collapse hopes of a European deal, trigger a chain reaction along migration routes or even see Italy and others allow new arrivals free passage and start another refugee crisis.

How many people are still coming to Germany?

In October 2015 at the height of the refugee crisis it was 140,000 and now it is around 150 a month. Merkel allies accuse the CSU of chasing a paper tiger in a bid to get the better of the far-right Alternative für Deutschland, set to enter the Bavarian parliament for the first time.

So what happens on Monday?

If Seehofer pushes through his tighter asylum rules as promised that will force Merkel to fire him, prompting a CSU withdrawal from government. If that happens the coalition collapses after three months.