‘He speaks, and his people sit up at attention. I want my people to do the same’ 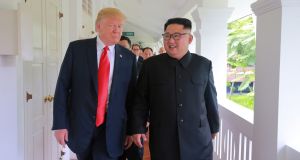 US President Donald Trump has praised the strongman tactics of North Korea’s leader, Kim Jong Un, and dismissed US military exercises with South Korea as a waste of money, as his administration and allies scrambled to accommodate the president’s promises to Mr Kim after their historic summit meeting this week.

The Pentagon and Seoul moved toward canceling a large-scale and long-planned military exercise that was set for August, defence department officials said.

Secretary of state Mike Pompeo wrapped up days of talks with top officials in South Korea, Japan and China, where he sought to maintain US steadfastness in the region.

In a Friday morning interview on the White House lawn, Mr Trump echoed what his critics have said: That his meeting in Singapore would elevate Mr Kim’s status as a credible world leader. By Mr Trump’s telling, it was part of a strategy to lower tensions with North Korea.

During the interview, with Fox and Friends, the president also called Mr Kim “the strong head” of North Korea. “He speaks, and his people sit up at attention,” Mr Trump said.

“I want my people to do the same.”

Asked to clarify his comments about people sitting up, Mr Trump later said he was kidding. But they served as a striking reminder of the president’s budding admiration for Mr Kim, a 34-year-old dictator who ordered the killing of his uncle and presides over a government that has brutalized and impoverished its people.

As Mr Trump savors the afterglow of his meeting with Mr Kim, he has left it to the Pentagon and the state department to pick up the pieces on military planning and diplomacy.

Officially, planning for the Ulchi Freedom Guardian military exercise, one of the world’s largest, is still moving ahead. But US military officials quietly sent a much smaller delegation than originally expected to an organisational meeting this week in Seoul, after Mr Trump’s surprise announcement in Singapore that he was ending joint military exercises as an inducement for North Korea.

“It costs us a lot of money,” Mr Trump said Friday. “I saved lot of money. That’s a good thing for us.”

After the summit, Mr Trump characterized the annual exercises as “very provocative” - a description that aligns with North Korea’s views and sharply deviates from his own defence department.

The Pentagon has long insisted that the exercises are not meant to provoke North Korea; rather, military officials said, they underline US commitment to its allies in the region and seek to ensure that South Korea, in particular, will be able to defend itself.

Defence department officials said Friday that they expected an announcement, most likely next week, that the Ulchi Freedom Guardian exercise will either be canceled or be scaled back sharply. Defence secretary Jim Mattis and his South Korea counterpart, Song Young-moo, discussed canceling the exercises during a telephone call Thursday, said a Defence department official who spoke on the condition of anonymity because the announcement had not yet been made.

Officials in Seoul have also strongly indicated that the exercise will be suspended, with President Moon Jae-in agreeing to be “flexible” as long as North Korea stays engaged in dialogue and starts moving toward dismantling its nuclear weapons program. That comment was widely taken as endorsing Mr Trump’s decision to end the exercises on the same conditions.

On Friday, Mr Trump told journalists that he would speak this weekend to diplomats about the path forward in the nuclear talks. He angrily denied that he failed to extract concessions from Mr Kim about how swiftly North Korea would surrender its nuclear arsenal or how the United States could verify its disarmament. - New York Times