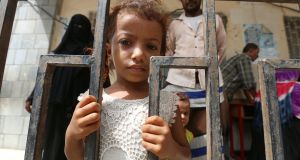 A girl stands behind a fence at a school to which she and her family have been evacuated from a village near Hodeidah airport amid fighting between government forces and Houthi fighters in Hodeidah, Yemen. Photograph: Abduljabbar Zeyad/Reuters

Talks are at an advanced stage for the United Nations to take over the administration of the vital port of Hodeidah under siege from a Saudi-led coalition, the UN humanitarian co-ordinator Lise Grande said on Sunday.

The Red Sea port is the main distribution point for commercial and humanitarian supplies into Yemen.

The Saudi-led coalition has threatened to seize the port militarily from Houthi rebels, but the UN special envoy Martin Griffiths is trying to broker a deal for the port to be administered independently by the UN. This would meet Saudi demands that the Iranian-backed Houthis can no longer use Yemen’s main entry point to smuggle arms and raise taxes to keep their war economy alive.

Both Britain and France failed to persuade the Saudi-led coalition not to mount an offensive last week, fearing the military attacks risk interrupting the supply of vital aid into a deeply fragile state.

There are further claims that the Houthis have mined the port, and could blow up its infrastructure as part of a scorched earth policy that incapacitates the aid programme.

Mr Griffiths has been in Sana’a, the capital of Yemen, to negotiate with the Houthis for their orderly withdrawal from the port. He is due to report to the UN Security Council on Monday.

Ms Grande said a political solution to the crisis was required, and that Mr Griffiths’ talks to negotiate the handing over of the port by the Houthis and the United Arab Emirates to the UN had reached an advanced stage.

In theory UN inspectors have boarded all ships entering Hodeidah to check commercial and humanitarian supplies do not contain weapons bound for the Houthis. The UAE claims the Houthis raise as much as $30 million-$40 million a year in taxes through their control of the port.

Ms Grande said 70 per cent of humanitarian supplies and 90 per cent of commercial supplies entered Yemen through the port, adding she feared a cholera outbreak of the kind that gripped the country last year.

She said she was overseeing the largest humanitarian operation in the world, and aid workers had decided to return to the city of Hodeidah due to the scale of the crisis.

However, there are doubts Mr Griffiths will be able to broker a deal on the port’s administration given the Saudi-led coalition is determined to use its military advantage – and lack of active political opposition from the west – to press not just for a Houthi withdrawal from the port area but from the entire region. Some members of the UN-backed Yemen government were making far wider demands of the Houthis than simple withdrawal from the port and town.

The UAE foreign affairs minister, Anwar Gargash, said the handover of the port needed to form part of a wider settlement.

“The UAE and coalition appreciates the tireless determination of the UN envoy to persuade the Houthis to put down their weapons and enter into meaningful political discussions. We and all of Yemen would welcome good news out of Sana’a. We encourage the envoy’s efforts to facilitate the safe handover of Hodeidah to the legitimate Yemeni government.

“Meanwhile the people of Hodeidah urgently want to be liberated. The coalition will continue with its military and humanitarian preparations to achieve this urgent result.”

On Thursday, the UN Security Council demanded that Hodeidah port be kept open to vital food shipments but stopped short of backing a Swedish call for a pause in the offensive to allow for talks on a militia withdrawal.

Jan Egeland, the head of the Norwegian Refugee Council, said the port had to be handed to UN administration to allow peace talks to start. He asked whether US, French and British diplomats were asleep.

UK Middle East minister Alistair Burt, speaking at Chatham House on Thursday, said the UK had urged the Saudis and UAE not to launch the attack, but the Saudis had rejected this, saying the three-year civil war could be ended faster with an assault on the port.

Mr Burt added that the British had said their piece to the Saudis, implying the UK was not intending to take any further action to dissuade them from their chosen course.