Not likely anyone will kill for Basque independence in foreseeable future

Basque Country Letter: It is strange to visit when the memory of Eta appears to be fading 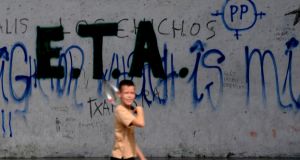 If you know a better view at dinner time in the French Basque Country than the panorama from the terrace of the Hotel Barberaenea, in the tiny village of Bidarrai, I’m happy for you. But this will remain one of my favourite places in the world.

A beautiful red stone façade, added in the 1700s to a 12th century Romanesque church, stands directly to the left of the terrace. Its simple and elegant structure is echoed by the high wall of a frontón (handball court) to the right. Lush green valleys fall away on all sides, rising again rapidly to a ring of Pyrenean foothills, with the vertiginous crested peaks of Iparla dominating them all.

I go to Bidarrai these days for the bucolic and relaxing atmosphere, for the spectacular hiking routes, for the rich bird and plant life, and for the reserved but gentle welcome from the villagers. Also for the sheep’s cheese and Irouleguy wine.

But my first visit to Bidarrai was driven by a very different agenda. A 60-year-old farmer, Christophe Matxikote, and his 16-year-old niece, Catherine Brion, had been killed here in 1986, blasted off the road by sub-machine gun fire, only a few hundred metres from the table where I now take my dinner.

Their killers were mercenaries, hired by the Spanish security forces to assassinate members of the Basque terrorist organisation Eta, who were living in a nearby farmhouse. The trigger-happy mercenaries somehow confused them with a farmer and a young girl.

I came to the village a decade later to research a book on this particularly dark phase of the complex conflict in the Basque Country. Eta had had the tacit sympathy of many democrats when it fought against the Franco dictatorship. But sympathy turned to revulsion when part of the group opted to accelerate its use of violence, employing nakedly terrorist methods with multiple civilian casualties, after Spain became a democracy in 1978.

That revulsion, and a fear that Eta’s campaign might give the Spanish army an excuse to seize back power, led ministers in Felipe González’s Socialist Party (PSOE) government to authorise death squads to harass Eta in the French Basque Country, where its members then still enjoyed immunity as “political refugees”.

The death squad strategy was a disastrous mistake – not only ethically perverse, but also mostly counter-productive in political terms. It enabled Eta propagandists to recruit another generation of radical Basques, persuaded by the death squad outrages that Spanish democracy was only a façade, using state terrorism and torture to repress their legitimate aspirations. Yet the dirty war did persuade the French to begin extraditing Eta members, critically weakening the organisation in the long run.

The death squads’ guns fell silent after the Bidarrai killings, though torture and other abuses persisted for many years.

It has taken another three decades since the 1980s for Eta to recognise the futility of its actions, calling a permanent ceasefire in 2011, disarming last year, and announcing its total dissolution only a few weeks ago.

By continuing to operate long after it had lost the oxygen of popular support, and failing to avail of opportunities to negotiate an exit strategy, the group has suffered a collapse in status in the Basque Country that I could not have imagined back in the 1980s and 1990s. In those days, a solid minority of otherwise very decent Basques regarded Eta as beyond criticism, at least in public.

Today, it is strange to visit a Basque Country where Eta’s very memory already appears to be fading, except of course among the families of its victims. Even its prisoners, who have gained nothing from its dissolution and remain dispersed in prisons far from home, fail to arouse much sympathy. I saw more Catalan flags this time around than the once-ubiquitous banners calling for the prisoners to be released.

I found a number of fresh graffiti proclaiming gratitude to Eta at the start of my visit, but they seemed numerous only in Hernani, a town where Eta had always enjoyed exceptional support. Elsewhere, visiting a dozen towns and cities and travelling right across the region, I saw only one more such slogan. Political support for Basque independence remains substantial, but it is most unlikely that anyone will kill in its name in the foreseeable future.

In the late 1990s, I asked a Basque journalist colleague, who lived under permanent threat of assassination for his opposition to Eta, what gave him strength to continue writing.

“I just know,” he said, “that one day Eta’s entire structure will collapse, just like the fall of the Berlin Wall.” It seems he was absolutely right.

Sitting on the lovely terrace in Bidarrai, I could only wish it had not taken so unconscionably long for that collapse to take place.