British PM Theresa May has pledged to increase funding for the NHS by 20 billion pounds (€22.88 billion) after Brexit, partly funded by money no longer spent on membership of the EU. Video: Reuters 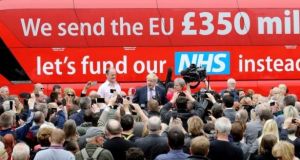 Boris Johnson with the Brexit campaign bus claiming that exiting the EU would make an extra €350m a week available to fund the NHS. Photograph: Christopher Furlong/Getty

British prime minister Theresa May is acting on a key promise of the pro-Brexit campaign, vowing to inject billions of pounds into the state-run National Health Service.

By 2023, the NHS will be getting an extra £20 billion pounds (€22.9 billion) a year, funded by money no longer being spent on the UK’s European Union membership, May said in a BBC interview on Sunday.

Her bold pledge is an effort to regain the political initiative as she faces increasing pressure on multiple fronts. Critics in Ms May’s divided Conservative Party are feuding over future ties to the EU, while negotiations in Brussels are making slow progress as the clock ticks down toward the UK’s March departure. There has been growing talk of plots to oust her among pro-Brexit Tories if she can’t deliver the clean break with the bloc that they want.

One of the most damaging complaints Ms May’s encountered is that she lacks a political vision and doesn’t believe in Brexit, the central policy of her administration. She campaigned to stay in the EU during the 2016 referendum.

Back then, her pro-Brexit colleague Boris Johnson toured the country in a red bus bearing the famous pledge to stop sending £350 million a week to the EU and “fund our NHS instead.” Mr Johnson, a potential leadership rival who is now foreign secretary, has been pushing Ms May to make good on his promise to voters.

“Some people may remember seeing a figure on the side of a bus a while back of £350 million a week in cash,” Ms May said in an interview with the BBC’s Andrew Marr Show on Sunday.

“I can tell you that what I’m announcing will mean that in 2023-24 there will be about £600 million a week, more in cash, going into the NHS. That will be through the Brexit dividend.”

The size of the UK’s long-term contributions to the EU - which will determine how much money will be released to other priorities - isn’t yet confirmed.

Under a deal reached last December, Ms May agreed to pay a financial settlement of up to £39 billion as the country exits the bloc. This could rise if the UK stays in the single market or customs union for an extended period of transition, or if the final deal involves closer trade ties to the EU than Ms May originally planned.

During her BBC interview, Ms May hinted that the cash would need tax increases, too, saying the country at large will be asked to contribute more for the health service.

In a separate interview, May was asked if income tax would rise, with the highest earners paying more, to fund her pledge.

“It is right, I think, that we say to people that because the NHS is so important to us that we do look at asking for the country to contribute more, but in a fair and balanced way,” she told LBC Radio on Sunday.

The NHS offers free medical care to all British citizens from birth to death and has an iconic status in Britain, regularly topping polls of voters’ priorities. The service is facing difficulty as the population ages and has become a major political battleground, which Ms May’s opponents in the Labour Party aim to tap. - Bloomberg