Red Sea port of Hodeidah, held by Houthi rebels, is aid lifeline for millions of Yemenis 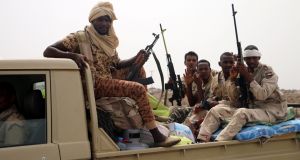 Sudanese forces fighting alongside the Saudi-led coalition in Yemen gather near the outskirts of the western port city of Hodeidah on Tuesday. Photograph: Najeeb Almahboobi/EPA

A Saudi-led alliance of Arab states launched an attack on Yemen’s main port city on Wednesday in the largest battle of the war, aiming to bring the ruling Houthi movement to its knees at the risk of worsening the world’s biggest humanitarian crisis.

Fighting raged near Hodeidah airport and al-Durayhmi, a rural area 10 km south of the city, media controlled by the Arab states and their Yemeni allies reported.

The assault marks the first time the Arab states have tried to capture such a heavily-defended major city since joining the war three years ago against the Iran-aligned Houthis, who control the capital Sana’a and most of the populated areas.

The United Nations says 8.4 million Yemenis are on the verge of famine, and for most the port is the only route for food supplies.

The Houthis deployed military vehicles and troops in the city centre and near the port, as warplanes struck the coast to the south, a resident speaking on condition of anonymity told Reuters. People fled by routes to the north and west.

Residents emerged from homes in the late afternoon to shop for food before the breaking of the Ramadan fast, he said.

Care International, one of the few aid agencies still there, said 30 air strikes hit the city within half an hour. “Some civilians are entrapped, others forced from their homes. We thought it could not get any worse, but unfortunately we were wrong,” said CARE’s acting country director, Jolien Veldwijk.

“Under international humanitarian law, parties to the conflict have to do everything possible to protect civilians and ensure they have access to the assistance they need to survive,” said Lise Grande, UN humanitarian coordinator for Yemen.

The UN special envoy to Yemen, Martin Griffiths, said the world body was talking to both sides to try to avert a battle. “We call on them to exercise restraint & engage with political efforts to spare Hodeidah a military confrontation,” he tweeted.

UN refugee chief Filippo Grandi said there was a danger Yemenis might try to flee across the sea to Somalia or Djibouti.

The Arab states say they will try to keep the port running and can ease the crisis once they seize it by lifting import restrictions they have imposed. Port workers told Reuters five ships were docked at Hodeidah port unloading goods, but no new entry permits would be issued on Wednesday.

Western countries have quietly backed the Arab states diplomatically, while mostly avoiding direct public involvement in the conflict. A major battle could test that support, especially if many civilians are killed or supplies disrupted.

The United States, Britain and France all sell billions of dollars of weapons a year to the Arab countries. Aid agencies urged French president Emmanuel Macron to cancel a planned Paris conference on Yemen co-chaired with Saudi Arabia.

The operation began after a three-day deadline set by the United Arab Emirates for the Houthis to quit the port.

“The liberation of the port is the start of the fall of the Houthi militia and will secure marine shipping in the Bab al-Mandab strait and cut off the hands of Iran, which has long drowned Yemen in weapons that shed precious Yemeni blood,” Yemen’s Arab-backed government-in-exile said in a statement.

Its leader, exiled President Abd-Rabbu Mansour al-Hadi, said his government had proposed compromises but would not let the Houthis hold the Yemeni people “hostage to a prolonged war which the Houthis ignited”.

A Yemeni anti-Houthi military official said the alliance had brought to bear a 21,000-strong force. It includes Emirati and Sudanese troops as well as Yemenis, drawn from southern separatists, local Red Sea coast fighters and a battalion led by a nephew of late ex-president Ali Abdullah Saleh.

Houthi leader Mohammed Ali Al-Houthi, who has threatened attacks on tankers entering the Red Sea, warned the alliance not to attack and said on Twitter his forces had struck a coalition barge. There was no immediate confirmation from the coalition.

The Sunni Muslim Arab states see the Houthi rise as expansionism by their Shia foe Iran. They aim to restore Mr Hadi, who was driven into exile in 2014.

The Houthis, from a Shia minority that ruled a 1,000-year kingdom in Yemen until 1962, say they took power through a popular revolt and are now defending Yemen from invasion.

Yemen has been in crisis since 2011 mass protests that ended Saleh’s 33-year rule. Mr Hadi came to power in a Saudi-brokered transition, but the Houthis drove him out. For a time Saleh joined forces with the Houthis, but they turned on each other last year and Saleh was killed. – Reuters