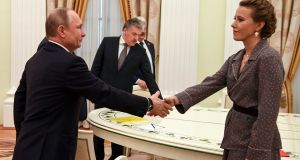 Russian president Vladimir Putin welcomes Ksenia Sobchak, Pavel Grudinin and Sergei Baburin during a meeting with candidates who opposed him in the election. Photograph: Yuri Kadobnov/POOL via Reuters

It was back to business for Vladimir Putin on Monday who, in between fielding international congratulations for his re-election, was meeting with his supporters and with the political opponents he had beaten so decisively at the polls.

But the Russian president was keeping people guessing about what lay ahead in his fourth term, saying he would wait until after his May 7th inauguration to reveal detailed plans.

Final results released on Monday morning showed Putin had won a 76.6 per cent of the vote cast at the election on Sunday, the highest score ever in a Russian presidential poll. Putin’s nearest competitor Pavel Grudinin, representing the Communist Party won 11.77 per cent of the vote. Kseniya Sobchak, a TV celebrity and liberal opposition activist, was among the straggling runners up collecting 1.68 per cent of the votes.

Addressing a rally in Manezh Square near the Moscow Kremlin late on Sunday night, Putin thanked jubilant, flag-waving crowds for support, saying Russia was on the “threshold of big success”.

“We have to preserve this unity. It’s very important to attract all these people who voted for other candidates to my side. We need unity in order to move forward.”

Opposition groups reported widespread incidents of electoral fraud and claimed the 67 per cent turn out had been achieved after pressure was applied to voters to go to the polls.

An observer mission from Organization for Security and Co-operation in Europe said on Monday the election had been conducted in an overly controlled legal and political environment marked by continued pressure on critical voices.

While Putin’s campaign team gloried in their victory, opposition leaders were at each other’s throats.

Alexei Navalny, the popular anti-corruption crusader who had campaigned for an election boycott after being officially barred from the ballot, rounded on Ms Sobchak saying she had colluded with the Kremlin to give a veneer of democracy to the election. “I refuse to work with you. You and I have no common goal. In these so-called elections, you showed that you were a champion hypocrite.”

The bitter row between Navalny and Sobchak pointed to a deepening rift in the Russian opposition that will complicate her plans to bring together a new liberal party to challenge Putin in the years ahead.

Putin met the seven election candidates he had defeated in the election on Monday to explore possible co-operation in future. Bruised by Mr Navalny’s insults, Ms Sobchak indicated before the meeting she was not minded to compromise, saying she would use the talks to urge Putin to release political prisoners.

Most Russian commentators agree that Putin, who has overseen an intensifying crackdown on the opposition since massive protests erupted ahead of his inauguration to a third term in 2012, is likely to move further to sideline all genuine political competition.

For the Kremlin the “whole election campaign had been geared towards demonstrating the superiority of the main hero of the campaign, over the Russian political system, his omnipotence and his disproportional stature in the whole miserable political landscape,” wrote Konstantin Gaaze, a political commentator at the Carnegie Moscow Center.

World leaders from China to Venezuela, Bolivia, Cuba and Syria, as well as a clutch of former Soviet states congratulated Putin on his election victory on Monday. Xi Jinping, who won rights to rule as China’s president for life at the weekend, declared strong support, saying his country’s partnership with Russia was at it’s “best level in history.” But in a sign of the dismal state of relation with Russia, few western leaders have made any comment about Putin’s re-election.

Speaking to reporters on Monday, Putin sketched out goals for his fourth term, pledging to prioritise the domestic agenda with a greater spending on health and education and the construction of new infrastructure. Investment in the military would also be a priority as Russia continued to bolster its defense capability.

Economists have pointed out that Russia, facing the risk of yet tougher western sanctions cannot afford to splurge on welfare benefits as well as the military and that something will have to give.

A clearer picture of Putin’s intentions will come when he appoints a new government, but on Monday he declined to provide any details of whether reformist doves or traditionalist hawks would have the upper hand in the cabinet, saying the decision would wait until after his inauguration.

Mr Gaaze said that with the Russian constitution barring presidents from serving more than two consecutive terms, the succession question would dominate Putin’s agenda in the coming years. Members of the elite Russian vulnerable to international prosecution for alleged meddling in the US election or pursuit or military aggression in Ukraine would see Putin as the only guarantor of their security and press him to stay in office for life.

However, Putin laughed off questions from reporters on Sunday night that he might run for yet another election at the end of his fourth term. “What you’re saying is a bit silly,” he said. “Do you think I will stay here until I’m 100 years old? No. “