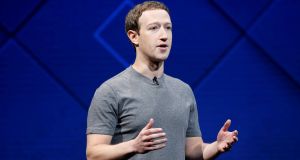 Facebook founder Mark Zuckerberg faces calls to testify before the US Congress about alleged misuse of personal data harvested from user profiles on the social-media platform. Photograph: Stephen Lam/Reuters

Facebook chief executive Mark Zuckerberg is facing calls from US and European legislators to explain how a consultancy that worked on President Donald Trump’s election campaign gained access to data on 50 million Facebook users.

Politicians in the United States, Britain and Europe have called for investigations into reports that political analytics firm Cambridge Analytica had harvested the private data on more than 50 million Facebook users to support Trump’s 2016 presidential election campaign.

The scrutiny presents a new threat to Facebook’s reputation, which is already under attack over Russians’ use of Facebook tools to sway American voters with “fake news” posts before and after the 2016 US elections.

Facebook was already facing new calls on Saturday for regulation from US Congress and questions about personal data safeguards after the reports in the New York Times and the Observer over the weekend.

“They say ‘trust us’. Mark Zuckerberg needs to testify before Senate judiciary,” she added, referring to a committee she sits on.

On Monday, Republican senator John Kennedy joined Klobuchar in calling on Zuckerberg to testify before Congress, and Democratic senator Ron Wyden sent a letter to Zuckerberg asking for answers to questions regarding the company’s policies for sharing user data with third parties.

Mr Wyden, an influential senator on technology issues, asked how many times during the past 10 years Facebook was aware of third parties collecting or processing data in violation of the company’s platform policies, among several other questions.

“The lid is being opened on the black box of Facebook’s data practices, and the picture is not pretty,” said Frank Pasquale, a University of Maryland law professor who has written about Silicon Valley’s use of data. Facebook usually sends lawyers to testify to Congress, or allows trade organisations to represent it and other technology companies in front of legislators.

It was not clear whether Republicans who hold congressional committee gavels would announce any hearings related to Facebook and Cambridge Analytica. But the calls reflected mounting bipartisan concern in Washington over whether internet firms are operating as fair trustees of the massive amounts of user data they collect. Facebook said on Friday that it had learned in 2015 that a Cambridge University psychology professor had lied to the company and violated its policies by passing data to Cambridge Analytica from a psychology testing app he had built.

Facebook said it suspended the firms and researchers involved. It also said the data had been misused but not stolen, because users gave permission.

Cambridge Analytica and its chief executive were not immediately available to comment on Monday.

“Tech companies all use data one way or the other as part of their businesses,” said Shawn Cruz, senior trading specialist at TD Ameritrade in Chicago. “They are going to get a lot more scrutiny over what data they are collecting and how they are using it.”

A spokesman for British prime minister Theresa May said the allegations were “clearly very concerning . . . It is essential that people can have confidence that their personal data will be protected and used in an appropriate way.”

Britain’s information commissioner’s office said it would be considering the potential new evidence as part its separate civil and criminal probe into whether Facebook user data had been abused in British elections. UK parliamentary committee chairman and Conservative politician Damian Collins said Facebook had avoided answering straight questions from the committee about what it knew about the abuse of its users’ social media data by Cambridge Analytica. “Someone has to take responsibility for this. It’s time for Mark Zuckerberg to stop hiding behind his Facebook page,” Mr Collins said in a statement.

The head of the European Parliament said on Monday EU legislators would investigate whether data misuse had taken place, calling the allegations an unacceptable violation of citizens’ privacy rights.

Germany’s Greens party also said it had asked the German government to report to parliament about the domestic impact.

In their joint letter, Kennedy and Klobuchar asked Senate judiciary chairman Chuck Grassley to hold a hearing with Zuckerberg and the chief executives of Twitter and Alphabet Inc’s Google. – Reuters