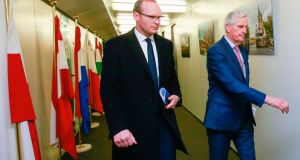 The UK has agreed that the “backstop” guarantee to avoid a hard Irish Border should be included in the draft Brexit treaty and that it will apply unless another solution is found in negotiations.

EU and UK negotiators have agreed to include new text in the draft withdrawal agreement that ties the parties to the “backstop” agreement reached in December. That agreement between the EU and the UK stated that, in the absence of another solution for the Border, Northern Ireland would effectively remain within the EU customs union.

Monday’s agreement comes more than two weeks after British Prime Minister Theresa May rejected the EU’s draft agreement that would have maintained a “common regulatory area” on the island of Ireland to avoid a hard Border. Mrs May rejected it as “unacceptable” as it would create a border in the Irish Sea.

In a significant development in Brexit negotiations, a new introductory section will be included in the draft withdrawal agreement to give legal effect to the “backstop” meaning it will apply “unless and until another solution is found.”

This keeps the door open on the backstop option while still enabling EU and UK negotiators to devise another solution for the Border, such as a future EU-UK trading agreement, or a specific solution to be proposed by London.

EU’s chief Brexit negotiator Michel Barnier, speaking after meeting Britain’s Brexit secretary David Davis, said the new draft legal text marked “a decisive step” but added that it was “not the end of the road.”

The developmentson the post-Brexit Border came with an agreement on a 21-month transition from March 29th, 2019 when the UK will quit the EU.

This will avoid a cliff-edge exit that British and Irish businesses fear and create a smoother path to a future permanent relationship.

On the Irish issue, Mr Barnier said that there must be “a workable practical and solution” to avoid a hard Border.

Good meeting with @MichelBarnier again this morning - #Brexit negotiations are moving forward - progress on Irish issues remains a key priority for both negotiating teams and solidarity with our EU partners remains strong. pic.twitter.com/JgN9xZe828

Both sides, he said, remained committed to the December political agreement that guarantees under the default “backstop” the avoidance of a hard Border.

Speaking alongside Mr Barnier at a press conference in Brussels, the UK’s Brexit secretary David Davis said both the EU and UK had agreed on “the need to include legal text detailing the backstop solution for the Border between Northern Ireland and Ireland in the withdrawal agreement that is acceptable to both sides.”

Addressing any doubts about the UK’s commitment to the December joint report, Mr Davis said “make no mistake” both the UK and the EU are committed to that agreement “in its entirety.”

He reiterated the UK’s intention to reach a comprehensive EU-UK trade agreement that would make it unnecessary to have a hard Border in Ireland.

“It remains our intention to achieve a partnership that is so close as to not require specific measures in relation to Northern Ireland and therefore we will engage in detail on all the scenarios in the joint report,” he said.

“We have also reached on consensus on the full set of issues which need to be addressed in any solution in order to avoid a hard Border.”

The EU and UK agreed last week a work programme to “tackle” those issues around avoiding a hard Border.

“While there is as yet no agreement on the right operational approach, we know what we need to do and we’re going to get on with it,” he said.

The EU and the UK have agreed that issues identified in the EU’s draft withdrawal text for finding “a viable and legally sound solution.”

Mr Barnier said that the two sides had agreed that the backstop solution must form part of the legal text of the withdrawal. “The backstop will apply unless and until another solution is found,” he said.

The negotiator said that the EU was ready “to look at all options” that would allow the EU and UK to meet our objectives in a constructive way.

In an effort to progress what have been difficult negotiations, the draft withdrawal agreement will be colour-coded: the colour green will apply to areas where agreement has been reached on negotiator level; yellow where objectives are agreed by negotiators but that are still being worked on; and white where an issue is proposed by the EU and still under negotiation.

The “protocol” covering the Irish Border issues within the withdrawal agreement is a mix of all three colours, reflecting the areas that are still under negotiation around the Irish question.

In a further safeguarding around Irish concerns on the Border, agreement was also reached today that the draft guidelines for the upcoming negotiations between the EU and the UK on the future trade agreement will state that “nothing is agreed until everything is agreed.”

These guidelines will be put to EU leaders, including Taoiseach Leo Varadkar when they meet at the European Council on Thursday and Friday.