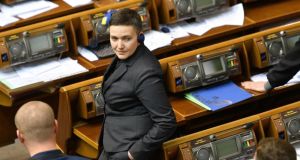 Nadezhda Savchenko says accusations that she plotted to blow up Kiev’s parliament and massacre its deputies are politically motivated. Photograph: Genya Savilov/AFP/Getty Images

Less than two years after Nadezhda Savchenko returned from a Russian prison to a hero’s welcome, the ex-military pilot dubbed “Ukraine’s Joan of Arc” is now accused of plotting to blow up Kiev’s parliament and massacre its deputies.

The latest extraordinary claims from Ukrainian prosecutor general Yuri Lutsenko – who recently accused former Georgian president Mikheil Saakashvili of planning a coup in Ukraine – are stoking a febrile political atmosphere that bodes ill for Ukraine’s stability ahead of major elections in 2019.

“The investigation has irrefutable evidence that Nadezhda Savchenko, a deputy of Ukraine, personally planned [and] personally gave instructions on how to commit a terrorist act here in this hall,” Mr Lutsenko told parliament.

He said that after using grenades and mortars to destroy much of the main chamber and the glass dome of the building in central Kiev, she intended to “use automatic rifles to finish off anyone who survived”.

At Mr Lutsenko’s request, parliament is due to debate on Thursday whether to lift the immunity from prosecution that Ms Savchenko enjoys as a deputy.

Ms Savchenko (36) was captured during fighting in eastern Ukraine in 2014 and handed to Russia, where she was convicted in a show trial over the death of two Russian journalists. She returned home to great fanfare in a prisoner swap in May 2016.

Now she accuses Mr Lutsenko and other allies of Ukrainian president Petro Poroshenko of trying to silence criticism and distract public attention from their broken promises ahead of parliamentary and presidential elections next year.

While calling the allegations against her politically motivated, she also urged Ukrainians to “overthrow the criminal authorities of Poroshenko”.

“Now there are many servicemen who hear me, who agree that a military coup in Ukraine is a quite expected and probably quite correct event,” she said.

Ms Savchenko says Ukraine’s leaders are at least partly culpable for Moscow’s annexation of Crimea in March 2014 and the deaths of more than 10,300 people in a four-year war between government troops and Russian-led separatists in eastern Ukraine.

She also accused fellow deputy Serhiy Pashinskyi of leading snipers into a hotel overlooking Kiev’s Maidan square before dozens of protesters were shot dead there on the bloodiest day of Ukraine’s 2014 revolution, and said Mr Lutsenko was covering up the truth of the massacre.

“I now I call on Ukrainians – if you understand that if now you fail to defend your right to life, your freedom, then you will live worse than under the terrorist, totalitarian Russian regime,” she said.

Ms Savchenko made her allegations after being questioned as a witness in another case that has left Ukrainians unsure of what and whom to believe.

Volodymyr Ruban, who has been hailed for negotiating prisoner exchanges between government and separatist forces, was arrested this month in a van carrying a hidden cache of weapons. He is accused of planning to use them to kill Mr Poroshenko and other top officials. Mr Ruban denies the allegations.

1 ‘It was pitch black’ - Rescued teenager describes night afloat with her cousin in Galway Bay
2 A million trees, including 400,000 oaks, to be destroyed this week
3 Mike Pence fretting as Kamala Harris shakes up Republicans
4 Aaron Brady, the man who said with pride he was a cop killer
5 Garda killer Aaron Brady will be almost 60 by time he leaves prison
Real news has value SUBSCRIBE