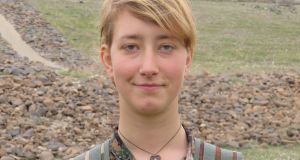 Anna Campbell, a British national who was killed alongside YPJ forces in Afrin. Photograph: YPJ/PA Wire

A British woman fighting alongside Kurdish forces in Afrin, northern Syria, has been killed, her Kurdish commanders have said.

Anna Campbell, from Lewes, East Sussex, was volunteering with the US-backed Kurdish Women’s Protection Units (YPJ) – the all-female affiliate army of the People’s Protection Units (YPG) – in the besieged city of Afrin when the convoy she was travelling in was struck by a Turkish missile on March 16th.

Sources say the 26-year-old initially travelled to Syria to join the Kurdish struggle against Islamic State, but begged her Kurdish commanders to send her to the Afrin front after Turkey launched a ground and air offensive to oust Kurdish forces from its borderlands in January.

“They refused at first, but she was adamant, and even dyed her blonde hair black so as to appear less conspicuous as a westerner,” a YPJ source told the Guardian. “Finally they gave in and let her go.”

She is not only the first British woman killed fighting alongside Kurdish forces in Syria, but also the first Briton to die there since Turkey launched its incursion into Kurdish-held territory on January 20th.

In a statement to the Guardian on Sunday, YPJ commander and spokeswoman Nesrin Abdullah said: “[Campbell’s] martyrdom is a great loss to us because with her international soul, her revolutionary spirit, which demonstrated the power of women, she expressed her will in all her actions. On behalf of the Women’s Defence Units YPJ, we express our deepest condolences to [her] family and we promise to follow the path she took up. We will represent her in the entirety of our struggles.”

Her father, Dirk Campbell, described her as a “beautiful and loving daughter” who “would go to any lengths to create the world that she believed in”.

“Anna was very idealistic, very serious, very wholehearted and wanted to create a better world. She wasn’t fighting when she died, she was engaged in a defensive action against the Turkish incursion.”

In recent months Turkey has shifted its focus from fighting Isis in Syria to preventing the YPG from establishing a foothold along its border, arguing that the YPG is linked to its own insurgent group, the Kurdistan Workers’ Party (PKK). The US, EU and Britain, however, do not consider the YPG a terrorist group, which it has supported in its fight against Isis since 2014.

Mr Campbell said his daughter had dedicated her life to the fight against “unjust power and privilege”.

He said she was a committed human rights and environmental campaigner who would “put herself on the line for what she believed in”.

“It seems a small thing, but I remember when she was 11, she protected a bumblebee from being tormented by other kids at school,” he recalled. “She did it with such strength of will that they ridiculed her. But she didn’t care. She was absolutely single-minded when it came to what she believed in, and she believed what Turkey is doing is wrong.”

He said his daughter’s passion for campaigning was inspired by her mother, Adrienne, who was well known on the south of England’s activism scene and died of breast cancer five years ago. “Anna was a credit to her mum, my wife, and was carrying on a lot of the kind of work that she was doing,” he added.

Ms Campbell told her father of her plans to travel to northern Syria last May after she heard about the grassroots feminist and socialist revolution that has swept Rojava (the semi-autonomous Kurdish region of northern Syria and heartland of the YPG/J) and inspired the Kurds’ fight against Isis.

“I didn’t try to stop her,” Mr Campbell said. “Because I knew, once she had decided to do something, she was unstoppable. That’s why she went to Rojava: to help build a world of equality and democracy where everyone has a right to representation. When she told me she was going I joked: ‘It’s been nice knowing you.’ I just knew it might be the last time I’d see her.”

Upon arrival in Rojava, Ms Campbell completed the YPJ’s mandatory month-long military training course, in which new recruits learn basic Kurdish, weaponry and battlefield tactics on top of a crash course in the egalitarian and feminist ideology of the YPG/J, and was assigned to an infantry division, comprising a mix of Kurdish and international fighters. There she was given the nom-de-guerre Helín Qerecox and sent to the front.

YPJ sources said she spent her first months in the country fighting in Deir ez-Zor, Isis’s last major stronghold and scene of the jihadist group’s bitter last stand. But with Isis now on the brink of defeat, foreign fighters within Kurdish ranks have faced a choice: return home or remain in Syria to help the YPG repel Turkey’s attack.

“After the initial attacks on Afrin, comrade Helín insisted on joining the operation to defend Afrin,” said Ms Abdullah. “Before leaving, she had already received her military training, and, although we wanted to protect her and did not agree with her decision, she incessantly insisted on her wish to leave for Afrin. She even gave us a condition: ‘Either I will go home and abandon the life as a revolutionary or you send me to Afrin. But I would never leave the revolution, so I will go to Afrin’.”

She added: “For us, as the YPJ, comrade Helín will always be a symbol as a pioneering internationalist woman. We will live up to her hope and beliefs. We will forever pursue her aim to struggle for women, for oppressed communities.”

Mark Campbell, activist and co-chair of the Kurdistan Solidarity Campaign, added: “Anna, by all accounts, was taken deep into the heart of the Kurdish people as she stood side by side with them in their darkest hour. Our thoughts and condolences are with Anna’s family and friends as this time.”

Ms Campbell is believed to be the eighth British citizen killed while serving with Kurdish forces in Syria.