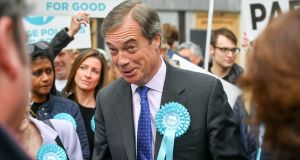 The president of the parliament, Antonio Tajani, “today refers the Farage issue to an advisory committee”, a source told the Guardian.

The advisory committee is a group of five MEPs who act as watchdogs over the parliament’s code of conduct. It stipulates that all members must declare expensive gifts and report whether third parties fund attendances at events.

Last week, Channel 4 revealed Mr Farage was generously funded by Mr Banks, the co-founder of the Leave.EU campaign, in the year of the Brexit referendum. Invoices, emails and documents showed Mr Farage benefited from a £13,000-a-month Chelsea home, a car with a driver, and promotional visits to the US in 2016.

After the documentary, the Liberal Democrat MEP Catherine Bearder called on parliament authorities to carry out an urgent investigation into Mr Farage’s “apparent contraventions” of the rules. The South East England MEP is one of five of the parliament’s “quaestors”, meaning she scrutinises funding and administration.

Under the parliament’s code of conduct, MEPs are required to declare whether they receive travel, accommodation or subsistence expenses from external sources to attend events. The declaration should reveal the name and address of the funder, details about the expenses and the type of event.

Mr Farage, who gets a €102,000-a year MEP salary, earned up to €700,000 from media appearances in 2014-2018, putting him in sixth place on a European Parliament “rich list” of MEPs’ outside earnings. The precise sum of his extra earnings is not known because MEPs only have to declare other earnings in broad bands.

The advisory committee will not meet until June 4th at the earliest, after this week’s European elections. It will appoint one of its members to lead the examination and write a report with a recommendation for a possible sanction. Any punishment, which could range from a reprimand to withholding salary, will be decided by the European Parliament’s president.

The Brexit Party leader, an MEP for 20 years, was last year docked half his MEP pay, after parliament administrators concluded he had misspent EU funds intended to staff his office. A political group dominated by Ukip – Mr Farage’s former party – was asked to repay €173,000, after an official report said EU funds had been misspent on national campaigns.

Spokespeople for Mr Farage have been approached for comment on the matter.

The British Electoral Commission is conducting a separate review into the Brexit Party’s donations system. The watchdog visited the party’s headquarters on Tuesday.

An commission spokesman said: “Today’s visit is about taking a closer look at the systems the party has in place to receive funds.

“It gives us active oversight of the rules and this includes helping those regulated to understand them and to ensure there are systems in place to comply with them.

“As a newly registered party running a national election campaign who have put information into the public domain about the level of their fundraising, it is right and proper for the regulator to be in regular contact with the Brexit Party.

“We have been talking to the party since it registered, discussing the rules and the party’s systems. But recently we have seen significant public concern about the way the party raises funds.

“We have not seen evidence of electoral offences, but the law in this area is complex and we want to satisfy ourselves that the party’s systems are robust.”

Mr Farage claimed the regulator was staffed by establishment figures and was not a neutral organisation – and said he believed his party was “more compliant” than any others standing in the European elections.

He told the Press Association: “I’ve crossed with the Electoral Commission before – they are not a neutral organisation, absolutely full of Remainers, full of establishment figures.”

Discussing the Brexit Party’s donation system, he said: “I’ve got a team of four qualified accountants looking after our money, our income. I bet we’re more compliant than any of the other parties in this election.”

Mr Farage said his party was looking for repeat donations, and had sent money back if it was unsure where it had come from.

He confirmed he was not talking to Channel 4 News after its report on the support he received from Mr Banks, saying: “I’m not speaking to them now, they are political activists. They are supposed to be a public service broadcaster, they’re not behaving in that way.

“We’ve no interest in talking to them whatsoever.”

He said Brexit Party chairman Richard Tice had asked to sit down with the broadcaster to talk about the issue.

“We’re not being silly about this, we’re just saying let’s try and get this relationship on an even keel.”

The editor of Channel 4 News, Ben de Pear, said on Twitter: “We hope to resolve our access ban from Brexit Party events ASAP.

“We were unaware of the 6-week ban until last Thursday when we broadcast this Nigel Farage investigation, revealing he had been bankrolled by £450k from Arron Banks. Until then we had full access, including to Farage.”

Polls indicate the Brexit Party is likely to be the best supported in Thursday’s European election. – Guardian/PA