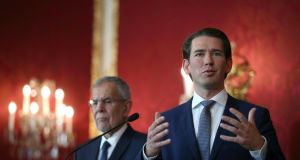 Austria’s political crisis has deepened after opposition leaders said they would back a vote of no-confidence in chancellor Sebastian Kurz, and most members of the far-right Freedom Party departed from the government.

Mr Kurz’s ruling coalition has been blown apart after an incriminating video was published in which Heinz-Christian Strache, former vice-chancellor and Freedom Party leader, was seen promising lucrative government contracts in exchange for political patronage.

Mr Strache quit from both posts following the video’s appearance. Other Freedom Party colleagues said they would follow him out of the government after Mr Kurz said on Monday that he also wanted Herbert Kickl, the interior minister, to be removed. President Alexander Van der Bellen approved that request on Tuesday.

Mr Kurz said that all the departing Freedom Party ministers would be replaced by technical experts, leaving a transitional government in place for three months until fresh elections in September.

But his own premiership is now at risk after opposition parties initiated a confidence vote, which will be held on Monday. The Freedom Party is set to vote against its former coalition partner, and the centre-left Social Democrats were on Tuesday weighing how they would vote.

Mr Kickl was adamant that his party would avenge his dismissal at the behest of Mr Kurz. He told the Oesterreich newspaper on Tuesday that it would be “almost naive” of Mr Kurz to think that “after the lack of trust he showed us, we would not show a lack of trust against him”.

Pamela Rendi-Wagner, leader of the Social Democrats, said the entire interim government, including ministers from Mr Kurz’s Austrian People’s Party, should be made up of technocrats.

“I am concerned about Sebastian Kurz’s approach. He has not sought or sounded out dialogue as to whether his proposal has a parliamentary majority. Only an independent-expert government now creates trust. A single [People’s Party] government does not create that trust,” she wrote on Twitter.

However, Neos, a new party in opposition, said it was against the confidence vote, saying other parties wanted to overturn the transitional government. “We have a responsibility in the opposition right now to stop escalating the crisis, to work to make the future better,” the party said.

Mr Van der Bellen said: “All those I have spoken to emphasise that they want to ensure Austria’s stability in the coming transitional period, and the unanimity on this point is a start.”

Wolfgang Sobotka, speaker of parliament and a member of Mr Kurz’s party, rejected criticism over delaying the confidence vote until Monday. He said he wanted to give “space” to campaigners ahead of the European Parliament elections on Sunday.

If Mr Kurz were to lose the confidence vote, Mr Van der Bellen would appoint an interim chancellor. – Copyright The Financial Times Limited 2019