Pope Francis describes feminism as ‘machismo with a skirt’

Nigerian nun Sr Veronica Openibo has scolded Roman Catholic bishops in the Vatican for their handling of the sexual abuse crisis, saying the Church had to acknowledge its "mediocrity, hypocrisy and complacency". Video: Reuters 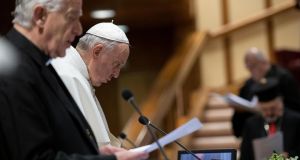 Pope Francis attending the third day of a summit at the Vatican on sex abuse in the Catholic Church. Photograph: AFP/Vatican media

Pope Francis has described feminism as “machismo with a skirt” during a brief intervention at the four-day meeting on the protection of minors in the church which is taking place at the Vatican.

Meanwhile, one of the church’s leading cardinals has admitted that files on clerical child abuse have been destroyed by bishops.

Pope Francis made his comment about feminism in an off-the-cuff remark after hearing an address from a woman at the meeting.

He was speaking following an address by Dr Linda Ghisoni, undersecretary for the Laity at the Vatican’s Dicastery for the Laity, Family, and Life and one of three women among 12 speakers scheduled to give addresses to the 190 Catholic church leaders in attendance at the meeting.

The church leaders include 10 other women. Ireland is being represented at the meeting by the president of the Irish Episcopal Conference, Archbishop Eamon Martin.

In her address, Dr Ghisoni recalled how “a priest, a few days ago, exclaimed ‘Still? We continue talking about abuse! The church’s attention to this theme is exaggerated’.”

She continued how “even a practicing lady told me candidly: ‘It is better not to talk about these matters, otherwise there will be distrust of the church. Talking about it obscures all the good done in the parishes’.”

Referring to priests who sexually abuse children as “howling wolves that penetrate the fold to scare further and disperse the flock” she said that “becoming aware of the phenomenon and (to) understand one’s responsibility is not a fixation”.

In his address to the meeting on Saturday, Cardinal Reinhard Marx, Archbishop of Munich and Freising, President of the German Bishops’ Conference and a member of the Council of Cardinals which advises Pope Francis, said clerical child sex abuse files have been destroyed in some dioceses.

“Files that could have documented the terrible deeds and named those responsible were destroyed, or not even created. Instead of the perpetrators, the victims were regulated and silence imposed on them.”

He said the “rights of victims were effectively trampled underfoot, and left to the whims of individuals”.

“These are all events that sharply contradict what the church should stand for,” he said.

At a press conference in the Vatican this afternoon he was talking about the German Catholic Church and that this destruction of documents had been established in a 2014 study conducted there. He said he assumed “Germany is not an isolated case”.

In his address to the meeting, he said “establishing transparent procedural norms and rules for ecclesiastical processes is essential. Institutional mistrust leads to conspiracy theories regarding an organisation, and the formation of myths about an organisation. This can be avoided if the facts are set out transparently.”

In another address on Saturday, Sr Veronica Openibo, a Nigerian who has worked in Africa, Europe and the United States, berated the bishops for mistakes in handling the sexual abuse crisis, saying the church had to acknowledge its “mediocrity, hypocrisy and complacency”.

“We proclaim the Ten Commandments and parade ourselves as being the custodians of moral standards and values and good behaviour in society. Hypocrites at times? Yes! Why did we keep silent for so long?” she said.

She told Pope Francis, sitting near her on the dais, that she admired him because he was “humble enough to change your mind”, apologise and take action after he initially defended a Chilean bishop accused of covering up abuse. The bishop later resigned.

“How could the clerical church have kept silent, covering these atrocities? The silence, the carrying of the secrets in the hearts of the perpetrators, the length of the abuses and the constant transfers of perpetrators are unimaginable,” she said.

She spoke of her shock when she watched the 2015 Oscar-winning film Spotlight, which uncovered how church leaders in Boston moved predator priests from parish to parish instead of defrocking them or turning them over to civil authorities.

“At the present time, we are in a state of crisis and shame. We have seriously clouded the grace of the Christ-mission,” Sr Openibo said.

“We must acknowledge that our mediocrity, hypocrisy and complacency have brought us to this disgraceful and scandalous place we find ourselves as a church. We pause to pray, Lord have mercy on us!” she said.

She said church leaders must shed their habit of hiding events for fear of making a mistake.

“Too often we want to keep silent until the storm has passed. This storm will not pass by. Our credibility is at stake,” she said.

Leading cardinals told the four-day conference on Friday that the church must repair the “systematic failures” that enabled sexual abuse to take root around the world, and bishops should start policing each other’s behaviour.

At the start of the conference on Thursday, five victims told painful stories of abuse and cover-up and the pope said they could expect concrete measures to come out of the meeting.

Victims groups have complained that while some priests who sexually abused children were eventually disciplined by the church and sentenced by civil authorities, the bishops who either enabled the abuse or covered it up have not been punished.

The conference ends on Sunday when the pope will make a final speech. The Vatican says it will then formulate follow-up measures to make sure all bishop return home knowing how to put anti-abuse procedures into place. – Reuters