Three MPs say they will delay Brexit if no deal reached 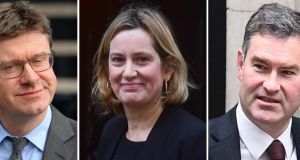 Greg Clark, Amber Rudd and David Gauke, who have issued a blunt warning to Tory Brexiteers that UK parliament will prevent them forcing a ‘disastrous’ no-deal break with the EU. Photograph: PA Wire

A trio of pro-EU UK Cabinet ministers have issued a blunt warning to Tory Brexiteers that the UK parliament will prevent them forcing a “disastrous” no-deal break with the EU.

Amber Rudd, Greg Clark and David Gauke said the Brexiteers in the European Research Group (ERG) will only have themselves to blame if Britain’s departure from the EU is delayed.

Their comments are likely to be seen as a thinly veiled warning they could defy the prime minister Theresa May to back moves by MPs to prevent a no-deal Brexit in next week’s crunch Commons vote.

The prime minister has repeatedly insisted Britain will leave on March 29th as planned.

But writing in the Daily Mail, the UK’s work and pensions secretary, the business secretary and the justice secretary said it was clear that a majority of MPs would support an extension to the Article 50 withdrawal process rather than see a no-deal break.

They said leaving without an agreement in place with Brussels would weaken national security, “severely” damage the economy, and risk the break-up of the United Kingdom.

“If there is no breakthrough in the coming week, the balance of opinion in Parliament is clear — that it would be better to seek to extend Article 50 and delay our date of departure rather than crash out of the European Union on March 29th,” they said.

“It is time that many of our Conservative party colleagues in the ERG recognise that Parliament will stop a disastrous no-deal Brexit on March 29th.

“If that happens, they will have no-one to blame but themselves for delaying Brexit.”

Moderate Conservative MPs have already written to Chief Whip Julian Smith to warn they are ready to vote for a delay to the UK’s March 29th exit if the “intransigence” of hard-line Brexiteers means Mrs May’s deal is again rejected by the House.

On Wednesday, the Commons is expected to consider an amendment tabled by Labour MP Yvette Cooper and Conservative former minister Sir Oliver Letwin enabling the House to extend the Article 50 withdrawal process if there is no deal by mid-March.

A similar amendment was defeated by MPs last month, but there is speculation that enough Tory rebels, alarmed that there is still no deal in place, could be prepared to back it this time round for it to pass.

Talks with Brussels are due to resume next week as ministers continue to seek legally binding changes to the Northern Ireland backstop, that will enable her finally to get the Withdrawal Agreement through the Commons.

MPs in the ERG have warned they will again vote against the deal if they are not satisfied with the changes.

Downing Street has said if there is no deal by Tuesday, the prime minister will at that point make another statement to the House and table an amendable motion to be debated and voted on the following day.