Italy to take some of 230 migrants on board ‘Lifeline’; says it hopes others will follow suit 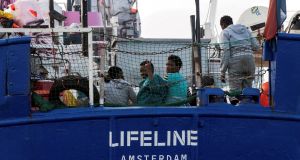 Migrants are seen on the deck of the Mission Lifeline rescue boat in the central Mediterranean Sea on June 21st. Photograph: Hermine Poschmann/Misson-Lifeline/Reuters

Malta will let the rescue ship Lifeline dock after Italy refused it entry, ending the vessel’s near week-long wait in the Mediterranean with more than 230 migrants on board, Italy’s prime minister said on Tuesday.

The offer resolved a standoff with Rome, where a new populist government, co-led by the anti-immigrant League party, has shaken European migration policy by announcing it will no longer let in ships operated by charities that rescue migrants.

The dangerous sea route to Italy has been the main route into Europe for asylum seekers from Africa, many thousands of whom have died at sea over the past few years. Lifeline said overnight one person had to be evacuated for medical reasons and that general conditions onboard were worsening.

Mission Lifeline, the aid group that runs the ship, welcomed Malta’s offer but said on Twitter “we now need EU countries to welcome the people.”

Italy’s prime minister Giuseppe Conte said his Maltese counterpart Joseph Muscat told him about his decision in a phone call.

The Lifeline has already spent five days stuck in international waters. After reaching Malta, the migrants will be divided up among European Union members who are willing to take them in, Mr Conte said. He did not say when it would arrive.

“Italy will do its part and welcome a portion of the migrants who are on board Lifeline in the hope that other European countries do the same,” he said.

Mr Conte said the ship would then be impounded and its captain investigated over reports that he ignored instructions to let the Libyan coastguard pick up the migrants.

Malta has yet to confirm, but issued a statement earlier saying it had been participating in discussions with Brussels to find a diplomatic solution that involved “the sharing of responsibility by a number of member states”.

Immigration has become an urgent political issue across Europe in recent weeks, since the new government took power in Italy and German prime minister Angela Merkel’s ruling coalition split over the issue.

Europe took in more than a million migrants, mainly asylum seekers from the Middle East and Africa, in 2015. Since then, the numbers have fallen sharply.

But the issue still sharply divides European governments and has led to a surge in anti-immigrant and far right political movements across the continent.

Countries that have taken in large numbers of asylum seekers want other EU countries to share the burden. Eastern European states, which have taken in among the smallest numbers so far, refuse to accept more and have turned the issue into a central focus for nationalist governments.

Leaders of the European Union failed on Sunday to come up with a joint position to tackle migration and will try again at a summit at the end of this week.

Also on Tuesday, Malta denied charity ship Aquarius access to its port for re-supply and a crew change, without providing any explanation for the decision, humanitarian group Doctors without Borders (MSF) said on Twitter.

A private Danish cargo ship, the Alexander Maersk, carrying more than 100 rescued migrants and not covered by Italy’s ban on charity ships, was permitted to dock on Tuesday in the port of Pozzallo on the Italian island of Sicily. –Retuers