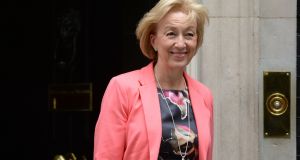 Andrea Leadsom, the eurosceptic leader of the Commons, told the Daily Telegraph that the “customs partnership” model believed to be favoured by the British prime minister might lead to more “red tape” for businesses.

Her intervention came as Government ministers clashed over their responses to business warnings about the impact of Brexit uncertainty.

Defence minister Guto Bebb said warnings from firms including aerospace giant Airbus could not be dismissed and accused members of the Cabinet of putting their leadership ambitions ahead of business concerns.

Mrs Leadsom’s intervention on customs comes as ministers prepare to decide on their preferred option to ensure smooth post-Brexit trade.

Cabinet ministers have been examining the customs partnership model, along with the “maximum facilitation” system favoured by Brexiteers, for several weeks in an attempt to find a solution to one of the main sticking points of the whole Brexit negotiations.

Brexiteers like foreign secretary Boris Johnson oppose a customs partnership with the EU, which would see the UK collect tariffs set by the EU customs union on goods entering the country on behalf of the bloc.

Their “max fac” alternative would, rather than scrapping customs checks, use technology to minimise the need for them.

Both systems have been dismissed by the EU.

Mrs Leadsom, who challenged Mrs May for the Tory leadership following David Cameron’s resignation in 2016, told the Telegraph: “I think the customs partnership looks quite bureaucratic and unwieldy, it has implications for needing to keep alignment with a lot of EU product regulations and so on.

“That does seem to lend itself to a more technology-driven solution than one where you’re seeking to pick up tariffs on third parties which can get complicated.

“The problem with complications, particularly for businesses, they are not keen on more bureaucracy, more red tape.

“That is potentially a less attractive option for businesses themselves.”

On Sunday Jeremy Hunt and Liam Fox rounded on Airbus and other firms after they questioned the government’s handling of Brexit negotiations.

Health and social care secretary Mr Hunt accused them of making “completely inappropriate” threats, warning that undermining Mrs May could lead to a disastrous “fudge”.

International Trade Secretary Dr Fox warned that taking “no deal” off the table during Brussels negotiations would weaken the UK’s bargaining position, telling Sky: “We’ve got to be free in the negotiation to say if we don’t get the deal we want, there won’t be any agreement.”

Their comments came after Airbus, Siemens and BMW all raised concerns about the direction of travel in negotiations and urged the Government to provide greater clarity.

But Mr Bebb, a defence minister and MP in North Wales — where Airbus is a major employer — said: “The dismissive attitudes shown towards our business community by senior cabinet ministers is both unworthy and inflammatory,”

He told BBC Wales: “Business wants a good deal and so does the government. Do the leadership aspirations of multi-millionaires trump the need to listen to the employers and employees of this country?”

Northern Ireland secretary Karen Bradley was in Brussels for talks with EU chief negotiator Michel Barnier about ongoing efforts to find a solution to keep the border with the Republic open after Brexit.

Speaking ahead of the meeting, Ms Bradley said: “I am here to reiterate the UK government’s commitment to securing a deal that delivers for all parts of the United Kingdom.

“This includes the government’s commitment to avoiding a hard border between Northern Ireland and Ireland, and maintaining the constitutional and economic integrity of the UK as a whole.” – PA