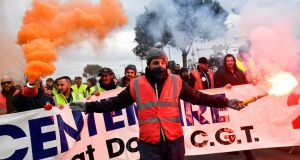 Dockers march with smoke bombs and hold a banner as they take part in a demonstration to protest against the pension overhauls, in Marseille. Photograph: Clement Mahoudeau/AFP

Transport networks in Paris and beyond ground to a near halt as unions dug in for a protest that threatens to paralyse France for days and poses the severest challenge to Mr Macron’s reform agenda since the “yellow vest” protests erupted.

Riot police in Nantes, western France, fired tear gas at masked protesters who hurled projectiles at them. In Lyon and Marseille, thousands more protesters carried banners that read “Macron get lost” and “Don’t touch our pensions”.

“What we’ve got to do is shut the economy down,” Christian Grolier, a senior official from the hard-left Force Ouvriere union, told Reuters. “People are spoiling for a fight.”

Commuters in Paris dusted off bicycles, turned to carpooling apps or worked from home to avoid the crush on the limited train and metro services that operated in the morning rush hour.

Mr Macron wants to simplify France’s unwieldy pension system, which comprises more than 40 different plans, many with different retirement ages and benefits. Rail workers, mariners and Paris Opera House ballet dancers can retire up to a decade earlier than the average worker.

Macron says the system is unfair and too costly. He wants a single, points-based system under which for each euro contributed, every pensioner has equal rights.

For the former investment banker, the showdown with strikers will set the tone for the second half of his mandate, with more difficult reforms to come, including to unemployment benefits.

Nor is it without risk for the hard-left unions whose membership and influence have diminished in recent years. They face a delicate balancing act of needing to pressure the executive while not creating a public backlash.

“For 30 years successive governments have tried to bring reform and fail because the unions cripple the country,” said 56-year-old cafe owner Isabelle Guibal. “People can work around it today and tomorrow, but next week people may get annoyed.”

In Paris, riot police erected barriers in streets surrounding the president and prime minister’s offices ahead street protests in the capital.

Interior minister Christophe Castaner said thousands of anarchist “black bloc” and hardcore “yellow vest” protesters, who took to the streets for months over the cost of living and perceived elitism of political class, might try to wreak havoc.

Castaner ordered shops along the route to close. Some 6,000 police will be deployed, including dozens of rapid-response officers on motorbikes.

The SNCF state railway said only one in 10 high-speed TGV trains would run and police reported power cables on the line linking Paris and the Riviera had been vandalised. The civil aviation authority asked airlines to cancel 20 per cent of flights because of knock-on effects from the strike.

“It makes sense to have a single pension regime for all professions, one commuter who gave his name as Nicolas said. “Railway work has particularities just like other jobs, but I just don’t see that hotel, restaurant or construction work is any easier physically speaking or in terms of hours.”