US House of Representatives speaker Nancy Pelosi has announced that articles of impeachment are to be drawn up against US president Donald Trump. Video: C-Span 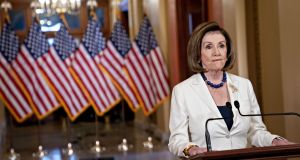 US House Speaker Nancy Pelosi announcing that articles of impeachment are to be drawn up against US president Donald Trump. Photograph: Andrew Harrer/Bloomberg

US president Donald Trump faces an impeachment vote as early as this month after the top Democrat in Congress ordered that charges against him should proceed.

House of Representatives speaker Nancy Pelosi announced she was directing the House judiciary committee to draft articles of impeachment – a key stage in the impeachment of a president – stating that Mr Trump had “seriously violated the constitution”.

“The facts are uncontested. The president abused his power for his own personal political benefit at the expense of our national security,” she said in a televised press conference. “If we allow a president to be above the law we do so surely at the peril of our republic. In America no one is above the law.”

The announcement makes it all but certain that Mr Trump will be impeached, with a vote in the 435-member House of Representatives likely before Christmas.

With Democrats in the majority, a resolution to impeach the president over his dealings with Ukraine is expected to pass. But the development also opens up the prospect of a bruising trial in the Senate early next year. With a two-third majority needed in the Senate to convict the president, Mr Trump is unlikely to be removed from office given that his Republican party holds 53 of the 100 Senate seats.

....This will mean that the beyond important and seldom used act of Impeachment will be used routinely to attack future Presidents. That is not what our Founders had in mind. The good thing is that the Republicans have NEVER been more united. We will win!

The impeachment process centres on allegations that Mr Trump abused his power when be asked Ukrainian president Volodymyr Zelenskiy to investigate former vice president Joe Biden and his son Hunter, who served on the board of a Ukrainian company when his father was in office. Democrats have argued that this involved a quid pro quo, whereby Mr Trump withheld promised military aid in exchange for announcing the investigations.

Mr Trump is only the fourth US president in history to face impeachment.

Andrew Johnson and Bill Clinton were impeached, but not convicted in the subsequent Senate trial. Richard Nixon resigned before an impeachment vote was held after he lost the support of his party in Congress over the Watergate affair.

But in a sign that the White House is planning a combative approach if the process moves to a Senate trial, Mr Trump declared on Twitter that the “do-nothing Democrats” were seeking to impeach him over “NOTHING”, adding “We will win!”

He also suggested in a tweet that Democratic politician Adam Schiff, a key figure until now in the impeachment process, as well as Joe and Hunter Biden and others could testify, raising the prospect that Republicans – who will control the Senate process – could call them as witnesses.

Mr Trump accused Ms Pelosi of having a “nervous fit” after she chastised a reporter on Thursday who asked if she hated the president.