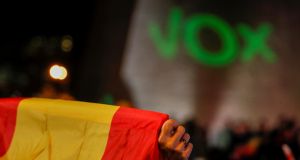 A series of attacks on immigrant children in Madrid has triggered a political row, with far-right politicians being accused of encouraging the incidents with xenophobic rhetoric.

Police are investigating the throwing of a training grenade into the grounds of a stay centre for immigrant minors in the Madrid district of Hortaleza on Wednesday. The device, which is less dangerous than a regular military grenade, did not explode on impact and police detonated it with a controlled explosion.

About 13,000 unaccompanied foreign minors are living in Spain, according to the Royal Elcano Institute think tank. The majority of them are from Morocco or Algeria and almost all of them are boys.

Children from the Hortaleza shelter in Madrid have reportedly been attacked on several occasions in recent weeks by youths wielding sticks, bats and oars. The workers at the shelter released a statement following the throwing of the grenade in which they said it “cannot be considered an isolated incident”.

“People who issue certain verbal attacks believing that they are harmless and have no effect, provoking xenophobia and discrimination – often that is the prelude to more serious acts,” he said.

His comments have been seen as a reprimand of the far-right Vox party, which has taken an aggressive line against unaccompanied immigrant minors. Irene Montero, spokeswoman for the leftist Podemos party, meanwhile, blamed “the violent and inhuman far right” for the “criminalisation” of immigrant children.

Vox more than doubled its share of seats in Congress in last month’s general election, becoming Spain’s third political force. During the campaign, it claimed that many unaccompanied immigrant children were criminals, living off stolen goods and terrorising women and children.

In one debate, Vox leader Santiago Abascal claimed that in the Hortaleza district, “women come and tell me that the police have told them not to go out wearing jewellery, mothers are worried because their daughters arrive home at night frightened of being attacked”.

But in the wake of the criticism from other parties, Vox has now presented itself as the victim of a political ambush. “Like hyenas they attack those of us who denounce the lack of security of our neighbours,” said Vox spokeswoman Rocío Monasterio on Thursday, in the Madrid regional parliament. “The hysterical, moralistic, cynical left does not want us to give them a voice.”

In a rancorous session, the right-wing Popular Party (PP) criticised Vox for its hard line on the issue and the immigration policy of the Socialist government. The parliament failed to draw up a consensual institutional response to Wednesday’s incident.

Meanwhile, Vox spokesman Iván Espinosa said that a “North African” had thrown the grenade. That contradicts reports that the police are investigating two possible theories: that those responsible were either members of the far right or a local gang who had a running dispute with one or more of the migrant minors.

Numbers of arrivals of the youngsters to Spain have increased in recent years due to a drought in Morocco, the reintroduction of military service there and a wave of social unrest in the north of the country.