UK election: ‘I will hold my nose and vote Liberal’

Sheffield Hallam is a knife edge constituency where parties that agree on Brexit can disagree on the campaign policy of Brexit. Video: Enda O'Dowd 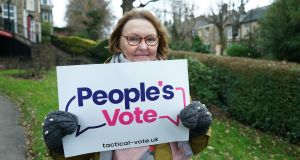 Jayne Doddsworth, a People’s Vote campaigner, sees this election about being “head rather than heart”. Photograph: Enda O’Dowd

Few people seem happy on the doorsteps in Sheffield’s affluent suburb of Crosspool about their choices in next Thursday’s British general election in the constituency of Sheffield Hallam.

On the doorsteps, they hear first hand how the divisiveness of Brexit and the two main party leaders, notably Labour’s Jeremy Corbyn here in Sheffield (a traditionally Labour city) have up-ended the traditional left-right alignment in UK politics and replaced it with people identifying as either Leaver or Remainer.

This is, after all, “the Brexit election”.

It is Labour’s economic policies that terrify James (62) in Crosspool. The retired lawyer, who does not want to give his surname, believes the party will bankrupt the country with the vast spending plans in Corbyn’s socialist manifesto. He has an earful too for the Lib Dem canvassers as they pass.

“I told them I will hold my nose and vote Liberal but I don’t agree with very much of what they stand for,” said the self-declared floating voter, who voted to Leave the EU in 2016.

“Because we are a marginal constituency, you have got to think what to do nationally and I don’t want Labour. I am voting tactically because I am frightened of Labour.”

The Liberal Democrats and Labour are in a straight-up fight for this constituency. The Lib Dems hope to win back the seat they lost in one of the shocks of the 2017 election when former deputy prime minister Nick Clegg was beaten by local lad Jared O’Mara in Labour’s first win in the constituency since it was created in 1885.

This time around, Labour are on the back foot. Within months of his election, O’Mara was suspended by Labour over alleged misogynistic and homophobic online comments. He quit the party but controversy continued to plague the MP, who was largely absent from Westminster due to mental health and other issues.

Sheffield Hallam was a Liberal Democrat stronghold from 1997 to 2017 due to its wealth, large student and graduate population, and politically engaged constituents. It is regarded by the party as one of its top seat gain targets with the fifth smallest ground to claw back on the 2017 margins.

The party, which is campaigning on a plan to stop Brexit, also sees the constituency as a likely gain because it voted to Remain in the 2016 Brexit referendum by almost 65 per cent.

Around a corner in Crosspool, Janet – another resident unwilling to share a surname – was not among those who voted Remain. The resident of Burnt Stones Drive roasted the Liberal Democrat canvassers as they passed by over the party’s pledge to ditch Brexit.

“I absolutely don’t agree with any suggestion of revoking article 50 in an arbitrary manner,” she says.

She declares herself on “the horns of a dilemma”: she has never voted Tory and cannot bring herself to, though she wants Brexit done. She will probably vote Labour, though it could mean a minority government.

“There is no good option. I will probably grit my teeth and vote Labour but I have huge reservations and I hate the anti-Semitic issues,” she says. “It should be called the ‘Hold Your Nose Election’ because I guess that is what we are all doing.”

In this heavy Remain constituency, Brexit is so divisive that it is even dividing people who want to stay in the EU. Some Labour Remainers here see Lib Dem Remainers as too radical in their stop-Brexit plan, running roughshod over the 2016 Brexit democratic vote by not giving the people another vote on a Brexit deal.

The Liberal Democrats adopted a policy in September of cancelling Brexit without recourse to a second referendum, but the party has retreated from that hardline stance since.

“It was a majority to leave but you can’t just take that away because you don’t like it. I feel a second referendum makes more sense to address that,” says medical student Danial Rostami-Hochoghan, a Remainer walking through Crosspool.

Tactical voting will play a key factor, as Lib Dem candidate Gordon explains to people on the doorstep, given how close the race is with Labour candidate Olivia Blake.

One voter tells Gordon he might reluctantly vote Lib Dems to keep Labour out. Gordon suggests to another, who is thinking of voting Conservative because he is fearful of Corbyn, that he should vote for her.

The People’s Vote group, campaigning for a second referendum, is busy playing tactics and, while it is backing Labour candidates in a number of Yorkshire constitutencies, wants its supporters to back the Liberal Democrat candidate in Sheffield Hallam. This stance is supported by Sheffield for Europe, an anti-Brexit non-party group, much to the frustration of Labour’s Blake.

“I am surprised that in a Lib Dem-Labour marginal where both candidates have committed publicly and signed various pledges to Remain that they think it necessary to tell people to tactical-vote here,” says Blake.

The Labour candidate says has come across Remainers and Leavers in the same households in Sheffield Hallam so it makes sense for Labour to commit to a second referendum “to try to listen to all people’s concerns”.

“I think it’s definitely a factor that people will be voting on,” she said.

Julian Rowden, deputy chairman of Sheffield for Europe, which is backing Labour in Sheffield’s other constituencies, says that tactical voting for the Lib Dems in this constituency is necessary in order to guarantee that a Remain MP is returned from Sheffield Hallam given what a “nightmare” issue Brexit is.

Before departing with Rowden’s group to knock on doors for Gordon in Hallam, Jayne Doddsworth, a People’s Vote campaigner, says she is voting for a party she would not traditionally vote for but justifies this because she sees this election about being “head rather than heart”.

She expresses frustration at “cliched” Remainers who have converted to Leave now because they are “fed up” with the political stalemate over Brexit. She herself is not for turning.

“We are the only Remainers left in the pub,” she says. “But I am very vocal.