Mayors to Emmanuel Macron: Hands off our purse strings 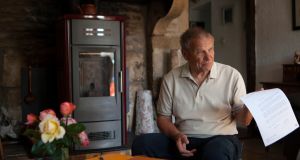 In a speech before several hundred mayors at the Élysée Palace on Wednesday evening, French president Emmanuel Macron will attempt to improve relations with locally elected officials by telling them they are the fabric of French life.

Guests were selected by lottery among the country’s 36,000 mayors. Some of those chosen said they preferred to boycott the reception. Macron is likely to hear grumbling over the petits fours and champagne.

Ninety-five per cent of the mayors represent towns of fewer than 5,000 inhabitants. They are the lowest rung on the government ladder, but they are also the most popular. An Ifop poll published on Tuesday showed that 63 per cent of the French like their mayors.

A year ago, Macron promised the annual mayors’ congress, which is reconvening until Thursday at the Porte de Versailles convention centre, that he would “come every year to give a full account of my commitments”.

The president was greeted with boos and whistles last year. François Baroin, the former conservative finance minister, mayor of Troyes and president of the Association of Mayors of France (AMF), said he regretted Macron’s decision. “Even if he was heckled, it isn’t a problem. He’s used to it,” Baroin told BFM TV.

Jacqueline Gourault, Macron’s minister for “territorial cohesion”, has said Baroin “always uses fairly violent political expressions”. She also said the president “is not afraid to confront the mayors” but “chose to do otherwise”.

Macron has poor relations with associations representing French departments and regions, as well as the AMF. All are led by conservative politicians. They have banded together with Gérard Larcher, the president of the Senate, another bastion of la France profonde, in a low-key rebellion against central government not unlike the gilets jaunes revolt over fuel taxes.

On September 26th, the AMF launched an appeal against the “ultra-centralisation” of French government. Mayors are particularly angry about Macron’s plan to suppress the “habitation tax” paid by anyone who occupies a lodging, whether owner or tenant. It provided some €20 billion annually to local governments.

In a four-page letter sent to all 36,000 mayors in the run-up to the congress, Macron promised to reimburse the habitation tax “to the last euro”. But the mayors want to know how he’s going to do it, and they are uneasy about the restructuring of the local tax system, to be unveiled next year. There is talk of diverting the property tax paid to the departments to towns and cities. But it is not clear how the departments would then function.

Hundreds of mayors simply hiked local taxes to make up for the loss of the habitation tax. Citizens were invited to denounce mayors who did so on the #BalanceTonMaire hashtag. Baroin was outraged by the publication of the offending mayors’ names.

The central government has long viewed local governments as a bottomless money pit. “Since his election, Emmanuel Macron has not ceased attacking the local authorities,” said a letter sent to 3,000 mayors from the conservative Les Républicains party in the run-up to the congress. “With the suppression of the habitation tax and the reduction of allowances, the government is smothering local authorities by reducing our resources . . .”

Funds for local government have declined annually for the past four years. The Élysée insists the cuts have ended. A new law limiting the speed limit to 80km/h on country roads, and Macron’s suppression of subsidised jobs that were administered by town halls, are also grievances. Most of all, the mayors view Macron and his En Marche! movement as urban phenomena with little understanding of rural France.

An in-depth study by the Sciences Po think tank Cevipof shows that, contrary to popular misconception, three-quarters of French mayors belong to no political party. They are overwhelmingly male, are for the most part university educated, and have an average age of 62.

Though 58 per cent of respondents in the Ifop poll said they want their mayor to stand for re-election in the 2020 municipal elections, half the mayors told Cevipof they would not do so. A study by the Senate showed they are tired of devoting so much time and energy to an ill-paid and thankless job.

Coronavirus: Ugandans prepare for a new war as clampdown takes hold 19:28
Coronavirus: British government admits it must ramp up testing 19:09
Coronavirus: Spain and UK suffer highest daily death tolls 18:17
Belarusian leader prescribes sport, sauna and vodka to beat Covid-19 17:32
Irish in Peru: ‘There are people still stuck here and they need not to forget about us’ 08:25