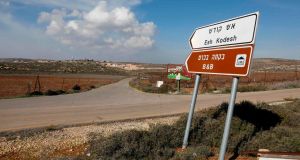 A road sign points towards an Airbnb apartment near the Jewish settlement of Shilo and the Palestinian village of Qusra in the occupied West Bank. Photograph: Menahem Kahana/AFP/Getty Images

Israel has reacted angrily to the decision by Airbnb to remove listings in West Bank settlements and is considering limiting the company’s operations in Israel.

Deputy foreign minister Tzipi Hotovely said her office will “work to convince Airbnb to reverse this shameful decision. This is first-class hypocrisy.”

Strategic affairs minister Gilad Erdan called on Airbnb hosts who reside in settlements to file lawsuits against the company in accordance with Israel’s anti-boycott law. He also promised to ask senior US officials to check if the company’s decision violated American anti-boycott laws which exist in more than 25 states.

“National conflicts exist throughout the world and Airbnb will need to explain why they chose a racist political stance against some Israeli citizens,” he said.

Airbnb had previously defended its operations in settlements, considered illegal by the international community, saying they were in accordance with US law and its mission “to bring people together in as many places as possible.”

An Airbnb spokesman said the decision, affecting some 200 listings, would take effect in the days ahead.

“We are certainly not experts when it comes to historic conflicts in this region,” the company stated. “Our team is struggling with this problem and we have been working hard to reach the right approach. We concluded that we should remove listings in Israeli settlements in the occupied West Bank that are at the core of the dispute between Israelis and Palestinians.”

Moriah Shapira, the owner of an Airbnb property in the settlement of Shiloh, north of Jerusalem, told The Irish Times she was shocked by the announcement.

“One of the things Airbnb say is that they are a community of the whole world and they accept everybody. Now they’re saying we cannot host and we are no longer members of the community. This is discrimination.”

She called on the Israeli government to negotiate with Airbnb to persuade them to re-think.

Palestinians welcomed the Airbnb decision as another victory for the BDS (Boycott, Divestment, Sanctions) movement. Senior Palestinian official Saeb Erekat said the move should be extended to Jewish neighbourhoods in east Jerusalem built beyond the 1967 Green Line border.

“Settlements are illegal and constitute war crimes,” he said. “We reiterate our call upon the UN Human Rights Council to release the database of companies profiting from the Israeli colonial occupation.”

Human Rights Watch, which has been in discussions with the company over the last two years, praised Airbnb’s decision as “a positive step” and called on other tourism companies to follow suit.

The Yesha Council, the umbrella body representing settlers, said the decision was “the result of either anti-Semitism or capitulation to terrorism, or both”, accusing Airbnb of becoming “a political site”.