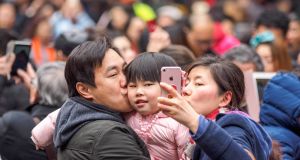 Celebrating the Chinese New Year in Yuyuan Garden: Many middle-class couples are opting to not take advantage of the relaxation of the restrictions on the number of children because it is simply too expensive. Photograph: Getty

For Shanghai residents Stella Zhu and Tony Wei, the biggest impact of the changes brought about by China’s economic rise over the past decades has been the fact that you have more choices than ever before.

“In the past you didn’t have so many choices. Nowadays sometimes you have too many choices,” says Zhu, a 37-year-old lawyer.

These options can be what food to eat, where to educate your children, even how many children to have. Zhu is about to have her second child, which until a couple of years ago would not have been an option for most urban residents in China.

They do not know the gender of the child, because ultrasound scans are illegal, largely due to the preference for boys in rural areas which led to abortions of female foetuses. Zhu and Wei are happy to enjoy the surprise.

China’s economic rise in the past four decades has translated into a middle class that by the Chinese government’s reckoning is nearly 400 million strong. Consumer spending now accounts for more than 60 per cent of economic growth in China.

Wei runs a media company. He left his home town when he was 18 and went to study in Changchun. “I’ve never been back to live in my hometown. The city life is very different,” he says.

Both are well-travelled – Wei rode a motorcycle to Berlin from China last year – and prefer to use their English names for this article.

Although they are well-off, financial concerns were a factor when deciding on how many children they would have. Many middle-class couples are opting to not take advantage of the relaxation of the restrictions on the number of children because it is simply too expensive.

Both came of age during the period of reform.

“Maybe there has been a revolution in the past 30 years, it’s a very big difference. Maybe if I was born in a small town in the earlier days, I would be working in a factory. There are more chances for me to change my life now,” says Wei.

The social changes have also been felt in rural China.

With a population of nearly 1.4 billion, the pressure to succeed is intense

One young woman, who asked to be referred to by her family name Shu, was born in 1997, the year Hong Kong reverted to Chinese rule, in a village called Jinxiang, about three hours from Shenzhen, in Guangdong province.

Shu has two boys, aged four and two, and she lives in a house with her husband’s parents.

Shenzhen, just across the border from Hong Kong, has undergone several transformations over the years, from fishing village to manufacturing centre to high-tech hub, and the recent opening of the world’s biggest sea bridge is expected to boost the Pearl River Delta even further.

Here, as everywhere else in China, education is incredibly important to Chinese parents. With a population of nearly 1.4 billion, the pressure to succeed is intense. There are more than half a million schools, with 265 million students in the largest public education sector in the world.

“China’s economy is very good now and we don’t have the same kind of burdens as before. I hope my boys can go to the city, maybe not Shenzhen as it is very expensive, but at least study in the city near my village. Then the boys will have the opportunity of going to university and have a stable job if they stay in the city. If they come back here, they can start a business, so they can make more money,” she says.

She likes to put all the food in the refrigerator, sometimes for months. She puts it in there and she feels safe

“School fees are around a couple of thousand yuan [€250] per semester. There will be buses picking them up and sending them back. As long as the kids want to go, we will try our best to support them, no matter what,” says Shu.

Both Stella Zhu and Tony Wei joke about wanting their son Owen to be a football star and go to Harvard, but Zhu worries about being a “Tiger Mom” and having too high expectations, putting their children under too much pressure.

“I have no idea about what Owen will do. Some Chinese parents put crazy pressure on their children. But maybe in two or three years, I will also become like those crazy parents,” she says.

Wei’s parents are still in Guangxi. When his parents come for Spring Festival they stay for a couple of weeks, but it’s a big adjustment for them. “They find Shanghai very different, they have different habits, they don’t like big cities,” he says.

Zhu’s mother is 72 and lives with the family. “My mother’s generation is very different. In the old times, they didn’t have so much food or consumer items. At home she always wants to control how much we cook. She likes to put all the food in the refrigerator, sometimes for months. She puts it in there and she feels safe,” she said.

“The older generation cares about money because in the past they were too poor. I tell my mother not to worry about money so much, it’s more important that we are happy, that we have good food and are healthy. But she always says we spend too much money and need to save more money,” she says.

Shu says she is optimistic about the future. “Most people I know admire President Xi Jinping. We all know our lives are getting better, as long as you are not lazy. The roads are made of concrete now, not mud anymore. And we are making more money. My husband earns 1,000 yuan [€126] more per month than he did a few years ago,” says Shu.

Compared to my childhood, life is much better

She believes people are much happier now than when she was a child.

“It is much better and we are happy. I remember when I was young, I had to help my parents work in the field and it was so tiring. We were four children and we had so little money. We all quit school after primary school because we couldn’t afford it. Now it is much better. The girls who get married all help our parents. My brother also works in the city now in a restaurant and makes about 3,000 yuan [€379] a month,” says Shu.

“Compared to my childhood, life is much better and much more relaxing,” she adds.

She is open to what her children want to do in the future. “I think I will let them decide. They can do whatever they like as long as they don’t do something bad or become criminals. It doesn’t matter much how much money they make,” she says.

Stella Zhu is also looking forward to the future with hope. “It’s not like when we were younger, because now we have chosen our way. For me, my future is to work hard, continue as a lawyer, do better in my career, and of course you can earn more money and make your family life better.”