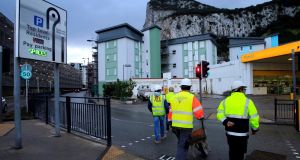 Spain has threatened to vote against the Brexit withdrawal agreement on Sunday because of objections over how the document could affect its involvement in the future of Gibraltar.

Spain initially appeared to welcome the agreement when it was unveiled last week. But on Tuesday, prime minister Pedro Sánchez said his government had been surprised to find that the deal is not clear enough in defining Spain’s ability to negotiate Gibraltar’s future status directly with the UK.

“As things stand, I regret to say that a pro-European government like that of Spain will vote against Brexit if there are no changes [to the withdrawal accord],” Mr Sánchez said of Sunday’s EU Council vote on the agreement.

Spain disputes British sovereignty of Gibraltar, which is perched on the southern tip of the Iberian Peninsula and the territory has frequently been the cause of tensions between Madrid and London.

The Spanish prime minister’s comments came a day after his foreign minister, Josep Borrell, had expressed similar concerns, albeit with less strident language.

The Brexit deal says that the UK and EU will “negotiate rapidly the agreements governing their future relationship”, beginning with the withdrawal in March 2019 until the so-called transition period ends in December 2020.

The Spanish government thinks this clause lacks clarity and could prevent Madrid from negotiating directly with London any changes to Gibraltar’s status.

“As a country we cannot accept that what happens to Gibraltar in the future should depend on negotiations between the UK and the EU,” Mr Sánchez said. “It has to be something that is defined, negotiated and agreed upon by the UK and Spain.”

The two countries have been holding a series of talks on Gibraltar in parallel to the Brexit negotiations, during which Madrid has put aside its longstanding sovereignty claim in order to prioritise other issues related to the territory.

A Gibraltar-specific protocol in the Brexit withdrawal document encourages both countries to co-operate on protecting the environment and the rights of the 10,000 Spanish workers who enter the territory each day. It also lays down guidelines for Gibraltar to align itself with international standards regarding fraud and smuggling.

However, some observers believe Mr Sánchez’s comments were a response to domestic pressure for him to take a tougher line. On Sunday, the leader of the opposition Popular Party, Pablo Casado, accused the government of carrying out a “terrible negotiation on the Gibraltar conflict, in which it hasn’t requested co-sovereignty”.

Meanwhile, in an interview with Politico, Mr Borrell said he thought “the United Kingdom will split apart before the Kingdom of Spain”, in reference to the impact Brexit could have on the relationship between Northern Ireland and Scotland with London.