A total of 71 people were killed and over 1,000 people remain unaccounted for in the wake of the deadliest wildfires in California's history. Video: Reuters 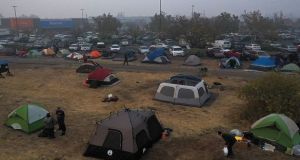 Tents pitched in a field next to a Walmart parking lot in Chico, California, where Camp Fire evacuees have been staying. Photograph: Justin Sullivan/Getty Images

Thousands of people displaced by California’s most destructive wildfire face heavy rains next week that could trigger dangerous floods and mudslides, while helping douse the flames. Hundreds of people are living in tents and cars.

At least 300 who fled the Camp Fire were sheltering on Friday in the flood-prone parking lot of a Walmart in Chico, about 24km(15 miles) west of where the blaze consumed the mountain town of Paradise on November 8th.

More than 1,000 are missing, according to police. The remains of at least 71 people have been identified so far.

A rain storm is forecast to hit next week and so authorities are asking people to leave the Walmart lot by Sunday afternoon, said Bryan May, a spokesman for the California Office of Emergency Services.

Hillsides that have been scorched by a wildfire are at risk from mudslides when it rains, say experts. The flames burn away vegetation that holds the soil in place and bake a waxy layer into the earth that prevents water from sinking more than a few inches into the ground.

Authorities say they have enough shelter space to provide a bed for everyone who wants one. But they acknowledge challenges ahead in finding more long-term housing for the displaced.

Mr May said it was not clear exactly how many people are in need of housing, but at the height of the Camp Fire authorities had ordered more than 52,000 people to evacuate.

A survey found only 100 housing units available for rent in all of Butte County, where the fire has been burning, said Mr May.

Already, more than 1,100 people are bunking at shelters in the area, according to the Red Cross. And countless more are staying with friends and family.

Malibu coast 5 hours ago, the smoke here in Beverly Hills/West Hollywood on the other side of the hills is intensifying - I am hearing from Malibu resident friends that since this video was taken the wildfires have spread across a massive section of the Malibu community, beyond the hills and down to the coast. A number of friends have lost their houses, just incredibly grateful that they and their families are safe. This is only a few miles away. Today on the street I passed by families with their belongings and pets, having left their homes behind. I have spoken to some - they are scared, exhausted, devastated from having to leave their homes. Offered help to them in any way that I could. Felt a loss for words often as I cannot even fathom what they are currently experiencing emotionally and circumstantially. Malibu 100% evacuated, parts of Thousand Oaks (if the mass shooting wasn't enough for the community yesterday), Hidden Hills, Calabasas evacuated. 150ft-high flames. The Woolsey Fire had exploded to 14,000 acres in Los Angeles and Ventura counties by afternoon today and it has grown so much since then.... In Northern California: 5 people dead, 70,000 acres (2,838 hectares) in flames, 2000 structures burned... parts of Paradise - with a population of 26,000 people - leveled. Only 5 percent of the fire contained. #californiawildfire #malibu #malibuwildfire #californiawildfires #malibu #malibuwildfires #woolseyfire #abc7 #abcnews #Pointdune #PCH #PacificCoastHighway #Calabasas #ThousandOaks #HiddenHills #campfire #chico #paradise #malibufire #topangacanyon #wooleyfire

Meanwhile, firefighters have managed to carve containment lines around 45 per cent of the blaze’s perimeter, up from 35 per cent a day earlier, even as the burned landscape grew slightly to 142,000 acres.

With more than 9,800 homes up in smoke, many refugees from the fire have taken up temporary residence with friends and family, while others have pitched tents or were camping out of their vehicles.

On Friday night, Butte County Sheriff Korea Honea said the remains of eight more fire victims were recovered during the day, confirming the death toll at 71. That far surpasses the previous fatality record from a single California wildfire – 29 in the Griffith Park fire of 1933 in Los Angeles.

Mr Honea said the total roster of people unaccounted for had swelled to 1,011 - up from the 630 names posted Thursday night and well more than triple the number counted as missing on Thursday afternoon.

“This is a dynamic list,” Mr Honea told reporters, saying it was compiled from “raw data” that likely included some duplication of names reported with more than one spelling.

Mr Honea said it was too soon to conjecture on the fate of those on the list, noting that as of Friday, 329 individuals previously reported missing had turned up alive.

“I don’t think it’s appropriate for any of us to sit and speculate about what the future holds.”

The names were being compiled from information received from a special hotline, along with email reports and a review of emergency-911 calls that came in on the first night of the fire, said Mr Honea.

Some listed have likely survived but not yet notified family or authorities, either because they lack phone service or were unaware anyone was looking for them, authorities said. Others may not have been immediately listed because of delays in reporting them.

The disaster already ranks among the deadliest US wildfires since the turn of the last century. Eighty-seven people perished in the Big Burn firestorm that swept the Northern Rockies in August of 1910. Minnesota’s Cloquet Fire in October of 1918 killed 450 people.

Authorities attribute the Camp Fire’s high death toll partly to the speed with which flames raced through the town with little advance warning, driven by howling winds and fuelled by drought-desiccated scrub and trees.

Outbreak of the Camp Fire coincided with a series of smaller blazes in southern California, most notably the Woolsey Fire, which is linked to three fatalities and has destroyed at least 500 buildings near the Malibu coast west of Los Angeles. It was 78 per cent contained on Friday night.

Scientists have said the growing frequency and intensity of wildfires in California and elsewhere across the west are largely attributable to prolonged drought that is symptomatic of climate change.

The precise causes of the Camp and Woolsey Fires are under investigation. But electric utilities have reported equipment problems in the vicinity of both blazes around the time they erupted.

US president Donald Trump, who has taken to Twitter to blame the recent spate of fires on forest mismanagement, was due to visit the fire zones on Saturday to meet displaced residents. Governor Jerry Brown and Governor-elect Gavin Newsom planned to join Mr Trump on his tour.

Smoke from the Camp Fire has spread broadly. Public schools in Sacramento 150km to the south, and as far away as San Francisco and Oakland, cancelled classes on Friday because of poor air quality. –Reuters