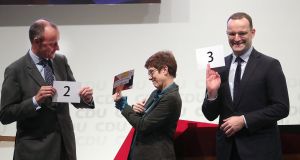 Germany’s northern city of Lübeck has three claims to fame: the Hanseatic League, high-end marzipan and the Mann literary dynasty.

On Thursday evening it had another fleeting moment of attention: as the city where the ruling, centre-right Christian Democratic Union (CDU) fired the opening shot in the race to succeed Angela Merkel.

After 18 years at the helm, Merkel will not stand again as leader when her party meets in three weeks’ time in Hamburg.

Three would-be heirs arrived in Lübeck for their first, public job interview. Nodding along happily to the well-tempered debate was a mild-mannered audience of middle-aged and pension-age party members.

The very civilised race – so far at least – is largely down to how the CDU views itself: preferring consensus to sharp knives or tongues.

One after another Annegret Kramp-Karrenbauer, Friedrich Merz and Jens Spahn set out their respective stalls: as continuity candidate, liberal conservative and rejuvenation moderniser respectively.

From the start, all eyes in Lübeck were on Merz, the CDU’s man that got away. First promoted by Merkel as her deputy, then shafted in 2002, Merz quit politics and left behind a phantom, what-might-have-been, pain in the CDU –

– a feeling he hopes to capitalise on now.

“When I come into a full hall like this, and see the happy, expectant faces, I notice what I missed all the years,” said Merz. “It’s great to be back.”

But nostalgia will get the lanky 63-year-old only so far, particularly with ambitious party figures annoyed by the prodigal son’s return.

The signs in Lübeck were that many doubters may yet warm again to his rhetorical and analytical skill that once alarmed Merkel. He presented a five-point plan to turn around the CDU, promising to keep it a centrist force, “not slide to the left or right”.

That was a play for party conservatives, the latter convinced Merkel pushed their party too far left beyond the political centre. Rather than pull the CDU right, as his critics warn forecast, Merz promised to restore public trust in the rule of law, “halve” the far-right Alternative für Deutschland (AfD) vote and push the CDU – struggling at 26 per cent in polls – back above 40 per cent.

Listening carefully as Merz stole all his arguments was Spahn. Equal parts ambitious and impatient, the 38-year-old health minister has found his political play – young, gay, conservative – undermined by the Merz revival.

Spahn told the Lübeck crowd that the CDU could not be turned around with nostalgia or more of the same – a dig at his rivals. Only a new generation could defend Germany’s traditional strengths and liberal progress of recent decades from left-wing moralisers and right-wing populists.

“We need to preserve and defend from all sides what makes us strong,” said Spahn, a close ally of Austrian chancellor Sebastian Kurz.

So far the clear favourite in polls is Annegret Kramp-Karrenbauer, on 46 per cent support, 15 and 34 points ahead of Merz and Spahn respectively. Formerly state premier of tiny Saarland in the southwest, the 56-year-old known as AKK serves currently as CDU general secretary. That would make her the most comfortable with Merkel’s intention to stay on as chancellor until 2021.

An economic liberal in the Merkel tradition, she is more socially conservative than the chancellor. In 2015 she surprised many in her party after likening marriage equality, after Ireland’s referendum, to polygamy and incestuous relationships.

Standing by that remark now puts her more traditional brand of conservatism at odds with the laissez faire of Merz or Spahn’s more tolerant alternative. In addition, Kramp-Karrenbauer knows her greatest challenge will be to present herself as continuity and renewal candidate in one.

Less polished than Merz, and less brassy than Spahn, AKK echoed in Lübeck well-worn Merkel lines on digitalisation and immigration. But in interviews she has criticised the “leaden” Merkel era of top-down politics.

“It can never happen again that things are decided in government and then all the party can do is agree,” she told the crowd on Thursday evening. “Things should be the other way around.”

Most striking about this first debate was its inward gaze and insecure tone.

Brexit was mentioned only in passing, as was Donald Trump. Candidates were asked just one question about refugees, a polarising issue many see as the beginning of Merkel’s end.

Instead the candidates were quizzed on plastic waste, wolves and the future of diesel. With the chancellor yet to depart the stage, it remains to be seen if the CDU has an appetite for an honest reckoning with the Merkel era.

In Lübeck at least, one of Europe’s most influential political parties appeared more interested in evolution than revolution.