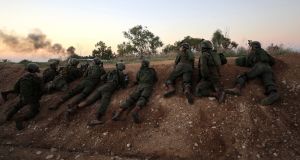 On Sunday evening a civilian car pulled up at a Hamas checkpoint set up among the warren of streets in Khan Younis, a town in the Gaza Strip close to the Israeli border. Inside were Israeli soldiers, including presumed members of the elite Maglan unit renowned for slipping behind enemy lines to collect intelligence or destroy targets. Some, according to a local resident, were dressed as women.

What happened next is unclear. But within hours seven Palestinians were dead, including a Hamas commander, along with an Israeli lieutenant colonel.

The soldiers were extracted under cover of Israeli jets and helicopters, taking with them the dead soldier and an injured comrade. They left behind the wrecked car and, according to images in local media, electronics equipment that they had attempted to destroy.

The episode triggered the worst violence between Israel and Hamas for several years before an uneasy truce was agreed. It also exposed a rare failure of an Israeli covert operation, the most public since its Mossad foreign intelligence service was implicated in the 2010 killing in a Dubai hotel of the founder of a lethal Hamas affiliate.

“Israel is [regularly] doing low-key operations to maintain our intelligence awareness,” said Israel Ziv, a former Israeli commander in Gaza. “This is something that usually never gets to the public.”

Most strikingly, the botched mission has brought attention to the Maglan unit, a covert and high-risk component of Israel’s military. Maglan is the Hebrew word for Ibis, a bird not native to Israel but one that has adapted to thrive there. Some, if not all, of those stopped at the Hamas checkpoint are thought to have belonged to the unit.

The sensitive operation went ahead when prime minister Binyamin Netanyahu was abroad in Paris – a clear sign of its urgency, said retired major general Uzi Dayan, who once ran an elite military unit dedicated to killing Yasser Arafat, the chairman of the Palestine Liberation Organisation (PLO).

He said decisions on approving such missions take into consideration whether the prime minister would be embarrassed by their failure or unveiling.

Mr Netanyahu cut short his trip as news of the raid broke.

“The main reason they went forward with [the operation] is because many, many people were sure it would succeed,” said Mr Dayan, who headed Israel’s National Security Council. “It’s risky, but it’s less risky than sending in an entire company [of soldiers]. But if there is a mess, then there is a big problem.”

Mr Netanyahu would have been acutely aware of the risks of the mission, Mr Dayan said. In the 1970s he rescued the prime minister, who was then a soldier, from an operation deep inside Syria.

The Maglan unit was formed in the 1980s when Israel was fighting in Lebanon and needed to install listening devices in Hizbollah territory. As such it was designed to operate in challenging environments, said a retired military official. Because of Israeli wiretapping and drone surveillance, Gaza militants rarely use phones, and often travel via a network of underground tunnels. Such tactics have blunted the effectiveness of Israel’s electronic surveillance, making missions such as Sunday’s necessary.

These operations add to a mystique that already shrouds Israel’s intelligence gathering and overseas assassinations operations. The deeds of the Mista’arvim – which roughly means “those who live among the Arabs” – have been celebrated in the hit Netflix TV show Fauda. In real life they are reported to use cinematic make-up and disguises, speak idiomatic Arabic, and sometimes pose as women to deflect attention when operating in Palestinian territories.

The New York Post reported in July that a fundraising event at a kosher steak house in Manhattan raised $250,000 for Israeli undercover missions.

The soldier killed in Sunday’s operation belonged to Israel’s Arab Druze minority, according to local media reports. The Druze, who serve in Israel’s army, are highly prized in undercover units because they can more easily pass as Palestinians.

He was identified only as M, in accordance with an army censorship order, and his funeral, attended by Israeli president Reuven Rivlin, was held privately.

In response to Sunday’s incursion, Hamas hurled more than 450 projectiles into Israel, killing a Palestinian guest worker in the town of Ashkelon. Israel responded by destroying 150 targets inside Gaza.

Tuesday’s truce prompted the resignation of Israel’s hardline defence minister Avigdor Lieberman, who described the ceasefire as “capitulation to terror”.

A senior Hamas official said that the group was initially furious following news of Sunday’s incursion, even to the point of risking war, because it was convinced that the unit was a hit squad. Israel is suspected of assassinating many Hamas and PLO leaders in the past 30 years, but it has refrained from killing senior Hamas leaders more recently, and an assassination would be seen by Hamas as a huge escalation.

While the Palestinian military leader killed in the raid was identified as Nour Barakah, commander for Khan Younis in Hamas, it is not clear if he was the target or simply caught in the checkpoint shoot-out. He reportedly lives not far from where the car was stopped. The home of Yahyah Sinwar, Hamas’s top leader in Gaza, is a few minutes’ drive away.

Following the extraction, Israel took the unusual step of clarifying that the mission had not been to kill or capture any Hamas leadership.

“This operation that Israel carried out, one that was not [meant to be] lethal...went wrong, and the Palestinians are trying to send a message that they will not tolerate these sort of operations in the future,” said Yossi Kupperwaser, a former head of the Israeli army’s intelligence research and assessment division.

Mr Ziv, the former Israeli military commander, said Israel would not have dispatched a unit as small as the one on Sunday if its mission was to assassinate a Hamas leader. “It [was] about intelligence goals – it wasn’t meant to kidnap or shoot somebody. On that aspect, we won’t use that technique. We have other ways.” – Copyright The Financial Times Limited 2018