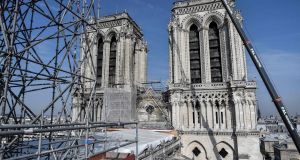 Scaffolding is seen during preliminary work on top of the Notre-Dame de Paris Cathedral three months after a major fire. Photograph: Getty Images

French authorities are under growing pressure over possible health risks from the Notre Dame cathedral fire after an environmental group filed a lawsuit saying swift action was not taken to contain potential lead poisoning, and a firefighters’ union raised concerns.

Hundreds of tonnes of lead in the cathedral spire and roof melted in the extreme heat of the fire in April, dispersing lead particles into the air that settled on streets and buildings in surrounding neighbourhoods.

Officials have insisted there was no danger to residents but pressure has mounted on Paris authorities and health officials in recent days over the safety of schools in the surrounding area as well as the health of hundreds of firefighters who fought the blaze and the construction workers shoring up the site.

The French environmental campaign group Robin des Bois this week filed a lawsuit saying: “The relevant authorities, including the diocese, neglected to assist residents, visitors and workers, allowing them to be exposed to the toxic fallout.”

The lawsuit accuses health agencies, government officials and the city of Paris of “deliberately putting people in danger” by not immediately taking measures to limit exposure to the contamination.

Environmental campaigners have said there were potentially high levels of lead in dust at ground level at schools and creches near the site and swift remedial action was not taken.

Clean-up work at Notre Dame was halted last weekend with workers sent home from the site after a leading government official acknowledged that anti-contamination measures were insufficient.

The Paris prefect, Michel Cadot, the government’s top official for the Paris region, said strict controls should have been introduced in the heavily contaminated interior of the cathedral, as well as in surrounding areas. Increased safety precautions are being put in place.

Paris city hall has closed a nursery and primary school that were jointly hosting a holiday club for 180 children in Paris’s 6th arrondissement “as a precautionary measure” after tests revealed high levels of lead in their shared playground.

Several other schools are being “deep cleaned”, with walls and furniture to be wiped and playgrounds hosed down during the summer holidays to remove dust. Local officials said this was being done to reassure residents “the risk is minimal”. Tests are continuing at other schools.

The investigative website Mediapart this month said Paris authorities were not being open enough about risks and had waited a month after the fire before conducting tests in the nearest schools. Health officials in the city insisted they had been transparent about testing for lead levels and were keeping parents informed.

Sebastien Delavoux, a firefighter and representative of the CGT union, said he was concerned that not enough had been done to decontaminate fire engines and equipment used to put out the fire and questioned whether sufficient health support and testing had been given to fire officers. – Guardian

Coronavirus: US sets single-day record cases during new surge 08:16
Coronavirus: Frances passes 1m cases; Europe sees record number of new infections 22:05
US election: Trump travels to Florida as he steps up campaigning 21:05
Sudan to normalise ties with Israel in move dubbed by Palestinians as ‘a stab in the back’ 19:48
Pompeo steps up diplomatic efforts to end Nagorno-Karabakh fighting 19:36

1 Sinn Féin’s stand on Covid is facing increasing questions from political rivals
2 Love in a time of Covid: John and Mary marry over 40 years after first meeting
3 Coronavirus: Close contact numbers fall in sign restrictions may be working
4 Cab investigates behind the massive gates of Chosen Few Motorcycle Club in Dublin
5 Two hundred Irish retailers for all your online Christmas shopping
Real news has value SUBSCRIBE