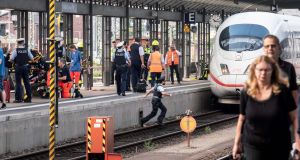 Police and medical helpers stand next to an ICE speed train at Frankfurt’s main station on Monday, after a man pushed a child and his mother in front of the moving train. Photograph: Frank Rumpenhorst/AFP/Getty Images

An eight-year-old boy has died after he and his mother were deliberately pushed on to train tracks at Frankfurt’s main railway station, German police have said.

The boy was hit by a high-speed ICE train and killed instantly. His mother was able to roll into a safe gap between two platforms and escaped injury.

The suspect was chased through the station by passengers who managed to tackle him to the ground. Police later confirmed a 40-year-old man of African origin had been arrested.

The incident happened at about 10am on Monday on platform seven of the station, which is one of Germany’s busiest. The boy’s mother was being treated for shock, according to a police spokeswoman.

“Passengers witnessed the disaster, and ran after the fleeing man. It was possible to arrest him while he was still in the station,” the spokeswoman said. She added that the man had intended to push a third person on to the track, “but she was able to defend herself”.

The suspect is believed to be from Eritrea, according to police. He was being held in police custody on Monday but his possible motive remained unclear. The alleged perpetrator and the victims are not believed to have known each other.

The incident follows the death of a 34-year-old woman nine days ago, who was pushed in front of a regional train in Voerde in the western state of North Rhine-Westphalia in what is also believed to have been an unprovoked attack.

The 28-year-old suspect, who was of Kosovo Serb origin and identified only as Jackson B, according to German police protocol, was known to police. He is being held in custody and is not thought to have known the victim.

Witnesses told police a man had approached the woman from behind without speaking and pushed her on to the track. The suspect has so far refused to answer questions.

Passengers waiting for trains in Germany are being advised to scan the platform for distressed or troubled faces and to stand at least two metres away from the platform edge.

Unlike in the UK, there are no ticket barriers at German train stations, so anyone can get on to the platform whether they have a ticket or not. – Guardian