Mind your Ps and Qs: Jacob Rees-Mogg bans ‘very’, ‘due to’ and ‘equal’ 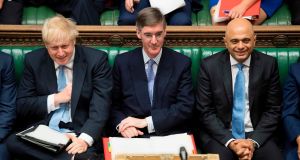 Leader of the House of Commons Jacob Rees-Mogg has issued a set of rules for staff in his office to follow, including a list of banned words and a requirement to use imperial measurements.

Mr Rees-Mogg, who was brought into the government by Boris Johnson on Wednesday, wasted little time in issuing the guidance to staff.

According to the style guide obtained by ITV News, Mr Rees-Mogg insists that all non-titled males are given the suffix Esq - short for Esquire - and says words including “ongoing” and “hopefully” are banned.

In a call for accuracy, he tells staff: “CHECK your work.”

The guidance was drawn up by Mr Rees-Mogg’s North East Somerset constituency team some years ago, but has now been shared with officials in his new office.

Other directions include a call for a double space after full stops and no comma after the word “and”.

He also set out a series of banned words and phrases that should not be used by his staff.

They include: very, due to, unacceptable, equal, yourself, lot, got, speculate, meet with, ascertain and disappointment.

As chair of the European Research Group - an influential, hard-Brexit Conservative backbench grouping - Mr Rees-Mogg has increased his influence in Westminster in recent years.

The official transcript of parliamentary proceedings, Hansard, records more than 700 instances of Mr Rees-Mogg using one or other of the banned words or phrases.

When standing for the Conservatives for the Central Fife seat in 1997, he took his nanny and his mother’s Mercedes out canvassing.

Mr Rees-Mogg has also used his position of influence to argue against abortion, even in cases of rape, and same-sex marriage.

He has been one of the most prominent backers of a hard Brexit and, last year, it was revealed that a City firm he co-founded had set up an investment fund in Ireland and was warning prospective clients about the financial dangers of a hard Brexit.

Following his appointment by Mr Johnson this week, he is responsible for organising government business in the Commons.

The Commons Leader’s office would not comment on the leaked document. – PA/Guardian