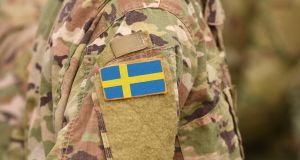 An unnamed Swede served fraudulently on international missions in Kosovo and Afghanistan and as a major and liaison officer at Nato’s headquarters in Belgium. Photograph: iStock

Sweden’s military leaders are struggling to explain how a man posing as an officer rose through the ranks to serve on UN peacekeeping missions and in a sensitive intelligence position at Nato headquarters.

The unnamed man was rejected by the Swedish officers’ academy in Enköping because he had no school-leaving diploma. Undeterred, he forged that qualification as well as a political science degree and moved on directly to the armed forces.

There he worked on encryption technology, a role his personnel file notes, he fulfilled “enthusiastically . . . correctly and responsibly”.

He later served on international missions in Kosovo and Afghanistan and, for three years until 2015, as a major and liaison officer at Nato’s headquarters in Belgium. There he served on a system used by 48 nations for sharing intelligence, surveillance and reconnaissance information.

Though Sweden is not a member of the transatlantic alliance, its co-operation with Nato members has increased since Russia’s annexation of Crimea.

Now the Swedish armed forces concede the man who claimed to have graduated from the military academy in 1999 had been “wrongfully employed”.

“It’s not good that this happened,” said Lieut-Col Carl-Axel Blomdahl, head of the investigation, to the Dagens Nyheter daily. “We have to appoint real officers to these positions.”

An investigation by Dagens Nyheter revealed the man was exposed twice in the past. In autumn 2018, he told the Swedish coastguard he was one of the country’s leading military contacts with the Russian FSB intelligence service. He was exposed and a report filed but the man, undeterred, was recruited again last summer as a commander for the Swedish contingent of a UN mission to Mali.

The tale has echoes of Friedrich Voigt, a shoemaker from Köpenick, east of Berlin. In 1906, dressed in the uniform of a Prussian captain he had bought in a second-hand shop, Voigt strode into the local barracks and rounded up a number of soldiers under his command.

Together they marched on the local town hall and occupied the building while he confiscated 4,002 marks from the municipal treasury. Voigt then left the soldiers under strict orders to stand guard for a further hour. He changed back into his street clothes and absconded with the money.

At his trial, Voigt said he was not motivated by cash but in testing the effect of uniforms on soldiers, trained to obey orders from superiors without question. He was sentenced to four years in prison but, because of huge public support, was pardoned by Kaiser Wilhelm after just eight months behind bars.

Voigt cashed in on his notoriety, writing a memoir, travelling the world and was immortalised in a play, later adapted for film, and as a waxwork in London’s Madame Tussaud’s.

It may be some time before Sweden’s make-believe major can cash in on his deception, the scale of which has caused uproar in his homeland.

Dagens Nyheter suggested that the country’s armed forces, ultimate guarantor of Sweden’s security, “cannot even ensure their own security”.