Trump ideology may be echoed in fractured EU 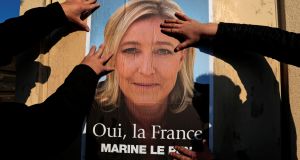 The surprise victory of Donald Trump in the US election has unsettled nerves in Europe. As elsewhere in the world, Brussels was caught unprepared for a Trump presidency. The impact of the new regime in Washington on EU-US relations has preoccupied officials in the intervening week. The future of trade relations and the implications of a possible shift in US foreign policy dominated this week’s meeting of foreign and defence ministers in Brussels.

Europe is facing a series of elections and referendums in the coming months that many believe could mirror the outcome of the US presidential race.

The themes of the US election have direct echoes in Europe – frustration with globalisation and the post-war economic order which has disenfranchised many, a concern about the economic and social effects of immigration, and an increasingly angry anti-establishment mood.

These are the motivations that drove many Trump supporters and have already contributed to the rise of Eurosceptic movements in Europe, as evidenced in the 2014 European elections, when anti-EU parties topped the polls. They were also the driving force behind the Brexit vote.

The first test for Europe falls on December 4th, when both Italian and Austrian voters go to the polls in ballots that could change the political landscape in their countries.

Italian prime minister Matteo Renzi – the charismatic former mayor of Florence who himself swept to victory on an outsider platform – is taking the biggest gamble of his political life by calling a referendum on constitutional reform which would curb the power of the senate and realign the power of regional government.

Renzi has cast the referendum as a vote on his government, threatening to resign if the ballot does not go his way. Polls suggest that he may lose, potentially paving the way for a general election.

On the same day, Austrian voters will elect their next president after the supreme court ordered a rerun of May’s election following controversy over postal votes. Five months ago, the Green Party-backed candidate Alexander van der Bellen narrowly beat the Freedom Party’s Norbert Hofer by 30,000 votes. Many are now wondering if the Trump effect could spur Hofer to victory.

In France, the Netherlands and Germany, preparations are under way for next year’s elections, with the selection process for choosing France’s republican candidate beginning this weekend. Marine Le Pen’s National Front, currently at about 25 per cent in the polls, has been one of the most vocal champions of Trump.

“Donald Trump has made possible what was presented as completely impossible,” she said this week, outlining how the US election result had given “hope” to those opposed to globalisation and the established political system. Signs of a more formal collaboration between the National Front and the Trump administration are also emerging following confirmation from Le Pen’s niece, Marion Marechal-Le Pen, that she has discussed collaboration with Trump’s newly appointed chief strategist Steve Bannon.

In the Netherlands, stirrings of anti-establishment discontent are also in the air, as Geert Wilders’s right-wing Freedom Party claims legitimacy from the US presidential result. “What happened in America can happen in Europe and the Netherlands as well,” Wilders tweeted on Wednesday. “Politics will never be the same again.”

Though still 10 months away, the anti-establishment vote will undoubtedly inform next September’s general election in Germany, as the Eurosceptic Alternative für Deutschland seeks to build on its success in recent regional elections.

At a time when the European Union is still coming to terms with Britain’s decision to leave the bloc, the idea of a populist, Eurosceptic party winning power in one of the union’s founding member states is a frightening prospect for many.

On a more banal, institutional level, the upcoming elections mean very little is likely to happen in terms of EU decision-making. There is widespread consensus that there will be no great leap forward in terms of EU integration any time soon. To this extent, Taoiseach Enda Kenny was in tune with his EU counterparts when he told an Irish Times Brexit meeting earlier this month that now was not the time for “some grand new chapter of EU integration”.

Instead the union must demonstrate that it can “take sensible positions, implement important decisions, and deliver concrete results for its citizens”, he said.

As the EU steels itself for Brexit, the focus will be getting through the next year. Only then will the EU take a serious look at its future and how it plans to retain the trust of its people.