UK officials could operate on both sides of Border, says Brexit secretary 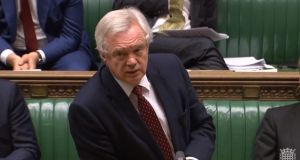 The UK’s Brexit secretary David Davis has said he is “determined” to keep an open border between Northern Ireland and the Republic after leaving the European Union. Photograph: PA Wire.

Irish and UK customs officials could operate on both sides of the Border under a proposal the British government is considering if Britain leaves the European customs union after Brexit.

Brexit secretary David Davis told MPs on Wednesday that the frontier between Norway and Sweden could offer a model for the Border if Britain left the customs union.

He said the British government was not currently considering the option of allowing Northern Ireland to remain in the customs union if the rest of the United Kingdom left it.

Norway is outside both the EU and the customs union, although it is part of the single market and the Schengen border-free area, while Sweden is an EU member state.

Customs officers from both countries operate spot checks along the border, although cars are seldom stopped.

Norwegian and Swedish customs authorities are allowed to provide services and exercise legal powers, not only on behalf of their home state, but that of the other state too. So if goods are exported from Norway, either a Swedish or a Norwegian customs office may take care of all documentation both for export from Norway and import into Sweden, usually at offices which are not situated on the border itself.

The system applies the other way around too, and both Norwegian and Swedish customs officers can carry out checks at any point within 15km of either side of the border.

Over the next few months, CCTV cameras equipped for automatic number-plate recognition will be installed along the Norway-Sweden frontier, aimed primarily at combating smuggling of drugs, alcohol and tobacco.

He said he had already discussed the issue of the Border with Michel Barnier, the European Commission’s chief Brexit negotiator, and was confident that he too was determined to avoid a hard border and protect the benefits of the peace process.

“Mr Barnier is very seized of this. When I saw him, he didn’t talk about the negotiations but he raised out of nowhere his involvement in it and his commitment to it. And it gave me a degree of comfort, as it were, that we’ll be able to do this,” he said.

The House of Lords EU committee said this week that the only way to avoid a hardening of the Border, if Britain left the customs union, was for a bilateral trade and customs agreement between Britain and Ireland. The committee also called for official recognition of the special status of Northern Ireland in the article 50 negotiations between Britain and the EU.

Mr Davis told MPs that the government would not publish details of its negotiating position before February, and he said he was open to the idea of transitional arrangements to implement a final deal but he did not want Brexit to be delayed.

“The British people want this done with some degree of expedition. They want it done properly, and soon, and that’s what we are trying to do,” he said.

Mr Davis was speaking as Theresa May prepared to travel to Brussels on Thursday for an EU summit. Ms May will leave the summit after the formal session, which will be followed by a dinner during which the other 27 EU leaders will discuss their approach to the Brexit talks.