‘I was really looking for an encounter where I could kill,’ Manila business community told 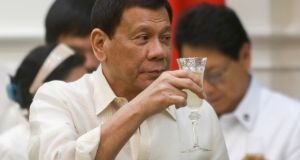 Philippine president Rodrigo Duterte: his national war on drugs has led to thousands of deaths since he took office in June. Photograph: Samrang Pring/Reuters

Philippine president Rodrigo Duterte has said he hunted down drug suspects “personally” during a deadly crackdown he instigated when he was the mayor of the southern city of Davao.

The president, whose national war on drugs has led to thousands of deaths since he took office in June, said he used to search for targets with police in his home city “just to show to the guys that, if I can do it why can’t you?”

“And I go around in Davao with a motorcycle . . . and I would just patrol the streets and looking for trouble,” he told business people in a speech at the presidential palace in Manila. “I was really looking for an encounter where I could kill.”

Mr Duterte did not explicitly say whether, as his remarks appeared to imply, he had carried out hits himself. He has a history of making contradictory comments about his anti-drugs campaign in Davao, sometimes boasting of his responsibility for killings and at other times denying it.

He told the audience in Manila on Monday “when you fight crime, there is always death”. But he added: “If you are asking me now if I killed people on bended knees with their hands tied at their backs, that is not mine.”

The president has denied allegations aired at a Senate hearing in September, where a self-confessed Davao hitman claimed he was part of a death squad that killed about 50 people under Mr Duterte’s orders.

But Mr Duterte also told reporters in 2015 that an Amnesty International report claiming he was responsible for 700 deaths during the anti-drugs campaign had actually underestimated the true number by 1,000.

Mr Duterte’s latest remarks are part of a pattern in which he delights in making outrageous statements during his frequent public appearances.

The 71-year-old leader made more headlines on Tuesday, when he reflected on how ill health, an ousting or even assassination could prevent him from completing a six-year mandate already also notable for his foreign policy tilt from the US towards China.

Mr Duterte told a rally of overseas Filipinos in Cambodia’s capital Phnom Penh that he was “not sure if I will still be around by the end of my term”. He lamented various health complaints including Buerger’s disease, a swelling of blood vessels, that he said was caused by smoking when he was younger.

“Oust me – good; assassinate me – better; I have this migraine every day,” he told the gathering. “I have a lot of issues with my spine. What I have is really Buerger’s disease.”

He said he had not followed doctors’ advice to have spinal surgery because his partner, a nurse who used to work in the US, thought it was too risky from her experience. “If you guys see me always in a sad mood, I am actually pushing a nerve here to relieve the pain,” Mr Duterte said, touching the right side of his face.

Speculation over the president’s health increased after he missed events at international summits in Laos and Peru because of stomach complaints and migraines. Ernesto Abello, a presidential spokesman, played down Mr Duterte’s latest remarks as “nothing serious” and said the various ailments were not affecting the president’s work.

Describing the presidency as his “last hurrah”, Mr Duterte offered a typically caustic verdict on the office he has held for less than six months, saying: “I don’t need it at my age”.

He said he had “found out very late” that he did not need the job.

But he said he had no regrets about his unexpected victory in May’s election. “I take pleasure at the end of the day, that’s the only consolation, I have a job, I am doing something right,” he said.