Cyril Ramaphosa sworn in as president of South Africa 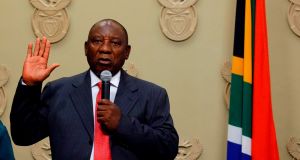 South Africa’s new president Cyril Ramaphosa is sworn into office after being elected at the parliament in Cape Town on Thursday. Photograph: Mike Hutchings/AFP/Getty Images

The former trade unionist, who became a billionaire businessman after apartheid ended, was elected unopposed in parliament on Thursday afternoon, sparking celebrations by the 251 African National Congress MPs in the National Assembly.

There was applause and singing from the ANC benches after Mr Ramaphosa, who has served as Mr Zuma’s deputy since 2014, accepted the presidential nomination from chief justice Mogoeng Mogoeng.

The parliament speaker, Baleka Mbete, congratulated Mr Ramaphosa after the ceremony had concluded, saying his election marked the end of a turbulent time for the country.

“South Africa has just emerged from a historic and challenging time,” she said.” “I, however, truly believe our democracy has matured and remains resilient”.

Not everybody was happy with the ANC’s choice to fill South Africa’s highest office. The opposition Economic Freedom Fighters walked out of parliament ahead of the ceremony to appoint Mr Ramaphosa.

The party, led by former ANC youth league leader Julius Malema, wants a new general election to be held rather than the ANC deciding on the identity of Mr Zuma’s successor.

Democratic Alliance leader Mmusi Maimane also said the opposition would continue to hold the ANC – which until recently had steadfastly backed Mr Zuma despite mounting evidence of criminality against him – to account. “We don’t have a Jacob Zuma problem; we have an ANC problem,” he said.

Mr Ramaphosa represents the moderate, reformist faction of the ANC and his appointment as president is likely to undermine the oppositions’ general election chances in 2019, due to his popularity with the middle classes.

His ascent to power followed two weeks of high political drama in which the ANC had sought to persuade Mr Zuma to resign voluntarily. At one stage the exit negotiations threatened to come to nothing, but in the end Mr Zuma was forced to leave office.

In an impassioned television address on Wednesday Mr Zuma said he disagreed with the ANC leadership’s decision to recall him more than a year before his term ended.

“I asked as to what was the problem,” he recalled, “Why must I be persuaded to resign, have I done anything wrong? And of course, the officials couldn’t provide what I have done.”

However, later that night in another address he said that as a disciplined member of the ruling party he would obey the order to leave his position.

Mr Zuma is accused of large scale corruption. As well as having more than 700 corruption charges pending against him that could be reinstated this month, he is accused of helping the controversial Gupta business family to illegally secure billions of rand in state contracts.

Mr Ramaphosa is now expected to deliver a state of the nation address on Friday. The key speech was meant to have been delivered earlier this month but it was postponed due to the crisis that erupted around Mr Zuma.

International investors have responded positively to the appointment of Mr Ramaphosa, as he has promised to turn the economy around using business-friendly policies and fight the corruption eating away at the heart of government.

In the hours before Mr Ramaphosa was sworn in, police confirmed that a member of the Gupta family and a number of associates would appear in Bloemfontein Regional Court on Thursday in connection with a fraud scandal at a dairy farm in the Free State Province.

The Mail and Guardian newspaper also reported on Thursday that a search was under way for Mr Zuma’s son, Duduzani, and another member of the Gupta family, Ajay. Both are being sought for their alleged involvement in the same Free State fraud scandal as the men who appeared in Bloemfontein’s regional court.