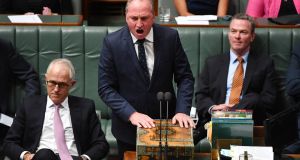 Australia’s government was engulfed by bitter political infighting on Friday over the handling of a sex scandal involving the deputy prime minister, which experts warned could threaten the future of the ruling coalition.

Mr Joyce also warned against outside interference in the running of the National Party, the junior coalition partner that has stood by its leader amid the scandal.

“There is nothing that we dislike more than implied intervention into the party processes of the National Party,” Mr Joyce added. “We are our own independent political unit. We make our own decisions, especially around those who are the office holders.”

Mr Joyce (50) has rejected repeated calls to resign following media revelations that he left his wife and four children after conceiving a baby with a 32-year-old staff member.

The conservative politician has been accused of hypocrisy for his actions, given his public opposition to legalising same-sex marriage on the basis of his traditional view of the institution of marriage. Mr Joyce has also faced questions from opposition MPs over claims of misused public funds, which the deputy prime minister denies.

For more than a week the scandal has dogged the government, which holds a thin majority in parliament and is lagging behind the opposition in opinion polls.

On Thursday Mr Turnbull attempted to regain control of the debate when he changed the ministerial code of conduct to ban ministers from having sex with their staff members.

Mr Turnbull issued a stinging attack on Mr Joyce, saying that the deputy prime minister had made a “shocking error of judgment” and asking him to reflect on his position.

Mr Joyce’s defiant and angry response on Friday raised the prospect of a breakdown in the relationship between the ruling Liberal and National coalition partners.

Stewart Jackson, politics lecturer at University of Sydney, said the government was in disarray. “If they can’t sort out this infighting they will be on very unstable ground,” he said.

He warned the scandal would likely tarnish the reputation of mainstream politics and prompt a further drift of voters towards minority parties and independents.

The changes to conduct rules have been prompted by the #MeToo movement, which has encouraged many industries to examine their workplace rules in the wake of sexual misconduct allegations. – Copyright The Financial Times Limited 2018