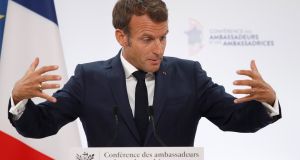 French president Emmanuel Macron: “Look at India, Russia and China. Today, they have much stronger political inspiration than the Europeans.” Photograph: Yoan Valat

French media were unanimous in praising the G7 summit that ended on Monday as a diplomatic triumph for President Emmanuel Macron.

“Whatever the end result of negotiations between Tehran and Washington, Macron has already attained his objective by imposing himself as the principal European actor on the international stage,” said Le Figaro’s front-page editorial, titled “Winning Bet”.

G7 summits had become a pro-forma exercise, where leaders merely signed off on statements prepared in advance by bureaucrats. Macron forced the leaders of the world’s most affluent democracies to engage politically and hash out their differences, the newspaper said.

Donald Trump was the odd man out at previous G7 summits. Trump’s escalating trade war with China and his spat with Denmark over his desire to purchase Greenland made observers fear the worst in the run-up to the summit.

But instead of antagonising Trump at Biarritz, Macron massaged his ego by putting the American leader at the centre of events. French media said Macron “tamed” Trump, though they did not exclude the possibility of outrageous, tweeted afterthoughts.

When he greeted French diplomats for his annual foreign policy address to ambassadors at the Élysée on Tuesday, Macron wondered aloud if he should simply stop talking and rest on his laurels over the G7 summit. Instead, he delivered a two-hour speech on his vision of the world and France’s place in it.

“I believe in one thing only,” Macron said. “The strategy of audacity, of taking risks. Not everything we try will succeed. That doesn’t matter. It’s lethal not to try.”

The G7 summit had been “useful”, Macron said, using one of his favourite words. He took a pessimistic view of the decline of the West, of its incapacity to confront what he calls the “ensavagement” of the world.

“Look at India, Russia and China,” Macron said. “Today, they have much stronger political inspiration than the Europeans. They think about the world with real logic, real philosophy, with an imagination we have lost.”

Macron said inequalities created by the market economy were profoundly transforming politics for the worse, throughout the western world. He has abandoned confrontational language about populist nationalist “illiberal democrats”, but he warned that more and more people would try to close off their countries if politicians could not show they were in control of events.

“At the end of the day, the Brexiteers’ slogan – retake control of our lives, of our nation – was a good slogan,” Macron said. “We must know how to retake control in an open nation. The days when we could tell our citizens that offshoring was good for them are over.”

If western leaders are content to be spectators and commentators, Macron continued, “We will definitively lose control and that means effacement . . . We know that civilisations disappear. Countries too. Europe will disappear and the world will be structured around two big poles: the US and China.”

Macron sees France as a non-aligned country with allies. One of France’s greatest strengths is its “power of mediation”, he said. He acknowledges that France ceased to be a super power at the end of the 18th century. But to use a cliché often applied to Ireland, he believes that France, a middle power, can punch above its weight.

“The first thing we must do is to play our role as a power of equilibrium,” Macron told the ambassadors. “We must be useful in the concert of the world.”

In particular, Macron wants to strengthen multilateralism, and build the concept of European sovereignty. Surprisingly in view of Brexit, he said “This agenda of European sovereignty must include, very profoundly, Great Britain. For historical and geographical reasons, it is indispensable that we continue to think with the UK.”

Two events after the summit closed showed how fragile Macron’s achievements were.

President Hassan Rouhani of Iran ruled out holding talks with Trump until the US agreed to lift sanctions against Iran, saying he would not participate in a photo opportunity. And Brazilian president Jair Bolsonaro’s chief of staff angrily rejected the €20 million in aid that Macron convinced other leaders to commit to fighting fires in the Amazon rain forest.

Macron has left an artistic blur around the Iranian nuclear issue, building on the minimum consensus which says Iran should not obtain nuclear weapons and must not destabilise its neighbours. He papered over his fundamental difference with Trump. Macron wants to build on the 2015 Iran nuclear deal. Trump wants to scrap it and strangle Iran until it says it gives up.

Macron appears determined to keep trying, through incremental steps that would provide some relief to Iran’s devastated economy. According to Le Monde, he proposes that Trump grant exemptions to Iran’s top eight petroleum clients, including China, India and Japan, if Iran will resume its commitment to observe the nuclear accord, from which Trump withdrew last year.

1 Nphet signals strong opposition to parts of Government plan to exit lockdown
2 Q&A: What restrictions are going to be lifted next week?
3 Ireland could lose out as France lays claim to most of €5bn Brexit compensation fund
4 Covid clause: No restrictions on Santa as Government says Christmas present delivery ‘essential’
5 400 – yes, 400! – Irish retailers for all your online Christmas shopping
Real news has value SUBSCRIBE