At least 40 feared dead or missing in shipwreck off Libya

More than 100 people died last week in another unseaworthy vessel 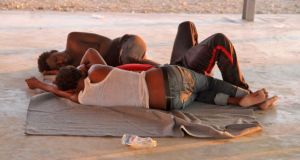 About 40 people are feared dead or missing after the latest wreck of a boat carrying migrants bound for Europe off the coast of Libya, while about 60 people may have been rescued, the UN refugee agency said on Tuesday.

“Terrible news coming in of potentially large loss of life in a shipwreck off the coast of Libya,” UNHCR spokesman Charlie Yaxley said in a tweet, adding that details were still sketchy.

“Around 60 people have been rescued and returned to shore. At least 40 people are estimated to be dead or missing.”

Three of those found dead were from Morocco, one was from Sudan and one from Somalia, Mr Qassem said. UNHCR said most survivors were from Sudan, with others from Egypt, Morocco and Tunisia.

Thousands of people have died every year in the central Mediterranean, among the hundreds of thousands attempting the crossing from north Africa to Europe in recent years.

The number making the voyage declined sharply from mid-2017 after European-backed efforts to disrupt smuggling networks in Libya.

As of last week, nearly 5,400 migrants had been intercepted or rescued at sea by the Libyan coast guard so far this year, UNHCR reported.

According to Italy’s interior ministry, 4,862 migrants have landed on Italian shores since January 1st. – Reuters