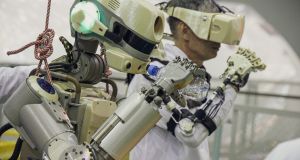 Astronauts at the International Space Station welcomed a new colleague on board on Tuesday as Fedor, the first ever Russian humanoid robot to go into orbit, arrived three days late for a training course.

An unmanned Soyuz MS-14 spaceship carrying the life-size robot docked at the ISS early on Tuesday morning after an attempt to tie up with the orbital laboratory at the weekend was aborted.

“The spaceship Soyuz MC-14 has successfully docked at the Russian segment of the International Space Station,” Roscosmos, the Russian state space agency, tweeted. “The crew are preparing to open the transfer hatch between the spaceship and the station.”

Fedor, who’s name stands for Final Experimental Demonstration Object Research, will help astronauts with routine tasks as he tests his skills during a 10-day stint at the ISS.

For Roscosmos, which is struggling to keep pace with its foreign competitors in space, the mission to send Russia’s first humanoid robot to the ISS has enormous publicity value.

Videos posted by the space agency show Fedor showing off his motor skills from shaking hands, passing a screw driver and doing press ups. In social media the six-foot tall robot is fast becoming a celebrity with more than 8,300 followers on his personal Twitter account.

Roscosmos used the MS-14 spaceship’s latest voyage to the ISS to test the performance of its newly upgraded Soyuz 2.1 rocket booster. For safety reasons there were no passengers on board. That left all eyes on Fedor who was strapped into the captain’s seat during blast off from the Baikonur cosmodrome in Kazakhstan last Thursday with a Russian flag jammed between the fingers of his silvery hand.

“Let’s go. Let’s go,” he tweeted during the launch repeating the famous phrase used by Yuri Gagarin, the Soviet astronaut who became the first man to travel to space more than half a century ago.

Everything went smoothly until the spacecraft approached the ISS early on Saturday morning and was prevented from docking by a technical malfunction at its target port. Astronauts scrambled to free up space at an alternative dock where the MS-14 finally completed its voyage early on Tuesday morning.

Fedor’s Twitter account was disabled during the three tense days of waiting in space, but sprang back to life once the ordeal was over . “Sorry for the delay. Got stuck in a traffic jam. Ready to continue work,” he said.

Fedor arrives at the ISS in the wake of the Nasa’s Robonaut 2 – a US-built humanoid robot that spent almost seven years at the station before retiring with electrical problems last year. But although he’s not the first in the door, the Russian robot can play a symbolic role in restoring Roscosmos’s reputation, which was damaged by an abortive rocket launch last year that forced two astronauts to parachute to safety.