Smokes ascends as flames rise during a fire at Notre-Dame cathedral in central Paris. Video: Reuters 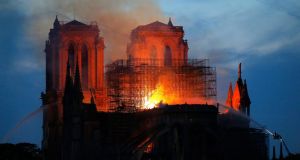 Firefighters tackle the blaze as flames and smoke rise from Notre Dame cathedral in Paris on Monday. Photograph: Michel Euler/AP

French firefighting official said the two towers of Notre Dame had been saved from total destruction in the fire which continues to burn in Paris.

The fire broke out at the medieval cathedral in central Paris on Monday afternoon.

A French firefighter official said that the structure of Notre Dame has been saved from total destruction but that one firefighter was seriously injured.

The spire of the cathedral collapsed on earlier on Monday afternoon and authorities have begun examining the cause of blaze. Renovations were undeway at Notre Dame de Paris [Our Lady of Paris], with some sections under scaffolding.

“Notre Dame is our history, our literature, part of our psyche, the place of all our great events, our epidemics, our wars, our liberations, the epicentre of our lives,” president Macron told reporters in front of the still burning Paris landmark.

“Notre-Dame is burning, and I know the sadness, and this tremor felt by so many fellow French people. But tonight, I’d like to speak of hope too,” Mr Macron said, announcing the launch of an fundraising campaign.

“Let’s be proud, because we built this cathedral more than 800 years ago, we’ve built it and, throughout the centuries, let it grow and improved it. So I solemnly say tonight: we will rebuild it together,” he added.

Distraught Parisians and stunned tourists gazed in disbelief as the inferno raged. Thousands of onlookers lined bridges over the River Seine and along its embankments, held at a distance by a police cordon.

“Basically the whole rooftop is gone. I see no hope for the building,” said witness Jacek Poltorak, watching the fire from a fifth-floor balcony two blocks from the southern facade of the cathedral, one of France’s most visited sites.

French president Emmanuel Macron earlier cancelled a planned address to the nation due to the “terrible fire” at the cathedral, a spokesman said.

Smoke could be seen billowing out from the top of the gothic building, as flames leaped out besides its two bell towers.

“Everything is collapsing,” a police officer near the scene said as the entire roof of the cathedral continued to burn.

It was not immediately clear what had caused the fire, but France 2 television reported that police were treating the incident as an accident. Paris prosecutor’s office says it has started inquiry into the fire.

German chancellor Angela Merkel has said shed is Deeply saddened by events in Paris,“our thoughts are with our French friends”.

Work began on the cathedral in 1163. The original structure was completed nearly 200 years later in 1345.

Some 13 million people visit the landmark building every year, more than 30,000 a day on average.

The first stone of the original structure was laid in front of Pope Alexander III after the Bishop of Paris, Maurice de Sully, proposed the cathedral after his election in 1160.

It famously features in Victor Hugo’s classic novel, The Hunchback of Notre Dame.

The cathedral also houses a beehive over the sacristy, which was added in spring 2013. Bronze statues were removed last week for works. – Reuters