Macron calls for shared strategy to deal with Turkish ‘aggression’ 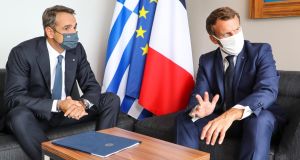 France’s president Emmanuel Macron met with the EU’s six other Mediterranean countries in Corsica on Thursday, in the hope of defining a shared strategy towards what France sees as Turkish aggression. An EU summit will address the same topic on September 24th.

Speaking in Ajaccio, Macron said he wanted “a common position on the Turkish question and to try to build a ‘pax mediterranea’”. Europe’s disputes with Turkey “cannot simply be delegated to Nato”, he added.

Macron has in recent months played the role of the scrappy young man protecting weaker partners Cyprus and Greece from the depredations of the neighbourhood bully. He and Turkish president Recep Tayyip Erdogan have repeatedly traded insults.

France and Turkey are both members of the North Atlantic Treaty Organisation (Nato), raising the alarming possibility of military conflict between Nato allies on European shores.

Under international law, dozens of Greek islands facing Turkey’s Mediterranean coastline have the right to a 12-nautical mile exclusion zone, depriving Turkey of a claim to natural gas reserves discovered beneath the eastern Mediterranean.

Turkey has virtually no petrol or gas resources, and is eager to reduce dependence on imports. It is trying to claim an exclusion zone around northern Cyprus, which it has occupied since 1974.

If Ankara cannot have hydrocarbons, it would at least like to be the hub for pipelines to Europe. That plan was dashed by an agreement between Cyprus, Egypt, Greece and Israel last January to transport Middle Eastern gas through Crete.

The current escalation began on August 10th, when the Turkish research vessel Oruç Reis entered Greek waters, escorted by Turkish military vessels. The Turks said it would undertake seismic exploration until August 23rd, but the Oruç Reis is still in Greek waters.

On its way to Lebanon following the explosion in Beirut port, the Tonnerre helicopter carrier, the second-largest ship in the French navy, carried out joint exercises with the Greek Navy. In other sabre-rattling, Rafale combat aircraft and French frigates also visited the area.

Macron met privately with Greek prime minister Kyriakos Mitsotakis before the summit in Corsica on Thursday. Paris and Athens have grown much closer in recent months, and there are rumours of new French arms sales to Greece, which already has French Mirages.

Turkey holds a deep grudge against the EU for its cavalier treatment of Turkey’s application for EU membership. Erdogan is said to have made Russian president Vladimir Putin his model, and appears to be more eager to divide Europeans than go to war with them.

Although Macron and German chancellor Angela Merkel present their differing approaches as complementary, Erdogan see the potential to divide them. Macron believes the EU must stand up to Erdogan. Merkel experienced Turkey’s capacity to do harm in 2015, when Ankara opened its EU borders to hundreds of thousands of migrants. She is also conscious that more than 2.5 million Turkish gastarbeiter (“guest workers”) in Germany massively support Erdogan.

Merkel tried to mediate between Greece and Turkey over the summer. “The German mediation . . . was interrupted and could not resume at the end of August because the Turks did not return to the negotiating table,” an adviser to Macron said.

On June 10th, the Turkish frigate Gokova three times locked its target-detection radar onto the French frigate Courbet, which attempted to pursue a ship carrying weapons to Libya. Radar lock-on is the last act before opening fire.