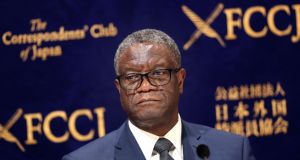 Congolese Nobel Peace Prize laureate and renowned gynaecologist Denis Mukwege has been put under United Nations protection, as threats to his life escalate.

Peacekeepers have been sent to secure the doctor and his hospital in Bukavu, eastern Democratic Republic of the Congo, four months after they were withdrawn because of a coronavirus outbreak

The 65-year-old – who survived a previous assassination attempt against him in 2012 – shared the 2018 Nobel Peace Prize with Nadia Murad, a Yazidi human rights activist and genocide survivor.

“As a result of his work treating survivors of sexual violence and speaking out against human rights abuses in DRC, Denis Mukwege is facing threats against his life,” she tweeted on September 2nd. “I stand in solidarity with my friend and call on the UN to provide protections for him.”

Dr Mukwege is from Bukavu, a city in eastern DRC, on the Rwandan border. He founded Panzi Hospital there in 1999, and has treated thousands of victims of sexual violence there since.

We welcome the redeployment of elements from #MONUSCO to #Panzi this morning to ensure the safety of our patients and staff. Thank you to the #UN for ensuring our protection.

He has long been vocal about the need to end the use of sexual violence as a weapon of war, and calls for perpetrators to be brought to justice. In 2014, he won the Sakharov Prize for Freedom of Thought, which is awarded by the European Union to someone who has been active in human rights work.

In a statement last month, the UN High Commissioner for Human Rights, Michelle Bachelet, called on the Congolese government to guard the doctor, who she said was “a true hero – determined, courageous and extremely effective”.

“For years, he helped thousands of gravely injured and traumatised women when there was nobody else to take care of them, and at the same time he did a great deal to publicise their plight and stimulate others to try to grapple with the uncontrolled epidemic of sexual violence in the eastern DRC.”

Ms Bachelet also called for an investigation into threats against him, which appear to have been made both by phone and through social media.

The doctor tweeted thanking the UN for helping out. Last month, he also appeared to comment directly on the death threats, tweeting: “To those who identify with our struggle for justice and peace, we urge them to never give in to provocation. They shall respond to messages of hatred with love, they shall oppose truth to lies, and grant forgiveness in response to insults.”

Dozens of armed groups have been active in the DRC for decades, in conflicts fuelled by disputes over the control of minerals.