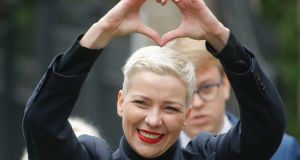 Maria Kolesnikova, one of Belarus’s opposition leaders, who has been detained. Photograph: Dmitri Lovetsky/AP

Opposition activists in Belarus are demanding to know the whereabouts of high-profile protest leader Maria Kolesnikova, after she reportedly foiled a bid to expel her to Ukraine by ripping up her passport at the border.

Ms Kolesnikova and two other leaders of pro-democracy rallies in Belarus, Ivan Kravtsov and Anton Rodnenkov, were allegedly abducted in the capital Minsk on Monday by security forces loyal to autocratic president Alexander Lukashenko.

According to a spokesman for the Belarusian border guards, in the early hours of Tuesday the three activists drove at high speed towards the Belarus-Ukraine frontier, “putting the lives of border guards at risk”, before Mr Kravtsov and Mr Rodnenkov “basically pushed [Kolesnikova] out and continued towards Ukraine”.

“This was a forced expulsion from their homeland, with the aim of discrediting the Belarusian opposition,” Mr Gerashchenko said.

“They didn’t manage to expel Maria Kolesnikova from Belarus, because this brave woman acted to stop them moving her across the border . . . Alexander Lukashenko bears full personal responsibility for her life and health.”

An opposition council on which the three activists sat said later on Tuesday that Mr Kravtsov and Mr Rodnenkov were safe in Kiev, but Belarusian officials refused for a second day to reveal where Ms Kolesnikova was being held.

After three opposition candidates were excluded from the August 9th presidential election, Ms Kolesnikova joined forces with Svetlana Tikhanovskaya to help her campaign against Mr Lukashenko, who has ruled Belarus since 1994.

Ms Tikhanovskaya insists she was the real winner of an election that official results gave to Mr Lukashenko with 80 per cent of votes, but after allegedly being threatened by his regime she fled to neighbouring Lithuania two days the ballot.

Hundreds of thousands of Belarusians have taken to the streets to reject the election results, demand Mr Lukashenko’s resignation, and denounce a police crackdown on peaceful protesters in which at least three people died, hundreds were hurt and more than 7,000 detained.

“My country, my nation, my people now need help,” Ms Tikhanovskaya (37) told a Council of Europe committee by video link on Tuesday.

“We need international pressure on this person who is desperately clinging to power and violating human rights,” she said of Mr Lukashenko (66), a former Soviet state farm boss.

He accuses the West of fomenting protests to oust him and weaken Moscow, and he warned in an interview with Russian state media on Tuesday: “You should not feel complacent . . . If Belarus collapses today, Russia will be next.”