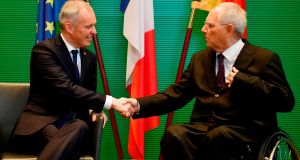 French president Emmanuel Macron and acting German chancellor Angela Merkel issued a joint declaration on Monday to mark the 55th anniversary of the Treaty of the Élysée.

Though the statements fell short of the new treaty that Emmanuel Macron called for in his Sorbonne speech on September 26th, 2017, they bear the stamp of Mr Macron’s integrationist fervour and provide an indication of the direction the EU will take if Dr Merkel forms a coalition with the Social Democratic Party.

“Franco-German friendship is a pillar of European integration,” the declaration begins. France and Germany are “major political powers and trusting neighbours” who “reaffirm their determination to deepen co-operation”.

The Treaty of the Élysée was signed by Gen Charles de Gaulle and chancellor Konrad Adenauer on January 22nd, 1963, to cement post-second World War reconciliation between the two great continental powers.

In a paragraph resembling Mr Macron’s speeches, the two leaders call for “a prosperous, competitive, more sovereign, unified and democratic Europe” and state their ambition is “to define common positions on all important European and international questions”.

The section on “bringing our societies and our citizens closer together” emphasises the importance of language training.

The leaders call for greater co-operation in foreign, defence, security and development policies, including “shared administrative and diplomatic mechanisms”. They promise to seek “European responses to the challenges of uncontrolled migration.”

The National Assembly and Bundestag elaborated upon the declaration in a resolution passed by both legislatures. The president of the Bundestag, Wolfgang Schäuble travelled to Paris with a delegation of German parliamentarians. Mr Schauble addressed the French Assembly before a second vote on the same text.

In the only allusion to past conflicts, the text notes that the Treaty of the Élysée was “a major step on the path of reconciliation . . . 18 years after the end of the second World War and after a century of enmity and conflict”.

The legislatures call on France and Germany “to promote fair taxation of digital companies on the European and international level”.

French institutes are to work with Goethe institutes to create 10 shared cultural centres. The two governments will strive for “a European base of social rights” that would establish “a minimum threshold” of working conditions and social protection throughout Europe.

The text expresses parliamentary support for Mr Macron’s initiative to hold “citizens’ consultations on the future of Europe” this year.