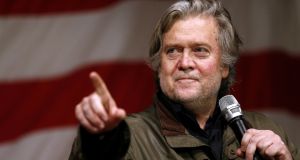 Steve Bannon was questioned in private by members of the House of Representatives intelligence committee on Capitol Hill on Tuesday. Photograph: Jonathan Bachman/Reuters

Steve Bannon, the former chief strategist to US president Donald Trump, has been subpoenaed to appear before a grand jury about his knowledge of any links between the Trump campaign team and Russia, according to US media reports.

The reports that special counsel Robert Mueller has subpoenaed Mr Bannon – first reported by the New York Times – emerged as the former chairman of Breitbart News was being questioned in private by members of the House of Representatives intelligence committee on Capitol Hill on Tuesday.

Several congressional committees are conducting their own investigations into Russian interference in the 2016 presidential election in parallel to the special counsel investigation, which was opened in May.

Mr Bannon volunteered to appear before the committee, while senior members of the current White House administration including communications director Hope Hicks are expected to testify in the coming days.

Mr Bannon’s appearance took place in the wake of the publication of journalist Michael Wolff’s tell-all book Fire and Fury: Inside the Trump White House, which includes allegations that Mr Bannon described a meeting between the president’s eldest son, Donald Trump jnr, and Russian individuals in Trump Tower in June 2016 as “treasonous” and “unpatriotic”.

Mr Bannon later stated that he had been referring in those terms to former Trump campaign chief Paul Manafort, who was also at the meeting, rather than the president’s son. But the June 2016 meeting is at the centre of inquiries into Russian links with the Trump campaign, after Mr Trump jnr admitted to having attended the meeting having been offered incriminating information about his father’s presidential rival, Hillary Clinton.

Meanwhile Mr Manafort and Rick Gates*, two former Trump campaign advisers who were arrested and charged with 12 counts of criminal activity in late October, appeared before a sitting of a Washington district court on Tuesday. The judge refrained from setting a date for their trial, which had been expected to start in May. It is now likely that the case will begin in September or October as the special prosecutor continues to work through more than 600,000 documents related to the case.

Both Mr Manafort and Mr Gates have denied any wrongdoing. The charges they face relate mainly to alleged money laundering and falsifying records. While both men have been under house arrest since the charges were brought last October, the judge ruled that Mr Gates could be removed from house arrest from Tuesday. He will, however, be obliged to live in Richmond, Virginia, under a nightly curfew and GPS monitor. Mr Manafort will remain under house arrest. The next court hearing has been scheduled for February 14th.

Separately on Capitol Hill, legislators questioned Kirstjen Nielsen, head of the department of homeland security, about immigration policy as the controversy over President Trump’s reported disparaging description of several countries during a meeting in the Oval Office last week continued.

Ms Nielsen, a Trump appointee who was at the meeting, said she “did not hear that word used” as she was questioned by senators on the president’s alleged use of the world “shithole” to describe Haiti and some African countries. But she said the president and others had used “tough” language.

As hopes continued to fade of securing a deal for so-called Dreamers – immigrants who were brought to the US illegally as children – Mr Trump reiterated his demands for a border wall with Mexico. “We must have Security at our VERY DANGEROUS SOUTHERN BORDER, and we must have a great WALL to help protect us, and to help stop the massive inflow of drugs pouring into our country!,” he wrote on Twitter.

* This article was amended on Wednesday at 8.45am to correct a factual error