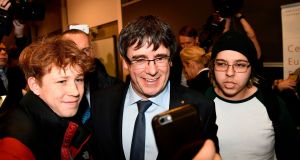 Former Catalan president Carles Puigdemont poses for photographs with students as he leaves the University of Copenhagen after attending a debate on Monday. Photograph: Jonathan Nackstrand/AFP/Getty Images

Spain’s supreme court has rejected the state prosecutor’s request to issue an international arrest warrant against Carles Puigdemont after the ousted Catalan president travelled to Denmark on Monday.

Mr Puigdemont, who has been in self-imposed exile in Belgium since the Spanish government introduced direct rule in his region in October, had announced last week that he planned to travel to Copenhagen for a conference on Catalan sovereignty.

The Spanish judiciary wants him to face trial for alleged sedition, rebellion and misuse of public funds, for his role in a failed bid for Catalan independence, and his lawyer had warned that he risked arrest during the trip.

Although supreme court judge Pablo Llarena acknowledged the legitimacy of the state prosecutor’s request that the arrest order be issued, he cited Spain’s ongoing territorial crisis in justifying his decision not to act upon it. The magistrate said circumstances might change “when the constitutional order and normal parliamentary workings cannot be affected by [the warrant’s] issuance”.

In December, Mr Llarena withdrew an international arrest order against Mr Puigdemont, fearing that technical differences between the Belgian and Spanish judicial systems would restrict the charges upon which he could be tried after being extradited.

Mr Puigdemont wants to be sworn in again as Catalan president from Belgium following an investiture debate that is due to begin on January 31st. He has proposed taking part in the process via video link or by using a substitute to represent him in the regional parliament, although the Spanish government has warned that both options are illegal.

On Monday, the new speaker of the Catalan parliament, Roger Torrent, of the Catalan Republican Left (ERC), formally proposed Mr Puigdemont, of the Together for Catalonia (JxCAT) coalition, as the only candidate for president in the upcoming debate.

Although he did not talk specifically about whether Mr Puigdemont would be able to be invested from afar, Mr Torrent pledged “to do everything I can to ensure that all members of parliament can express themselves freely as representatives of the people’s will”.

The new parliamentary speaker also said he had written to prime minister Mariano Rajoy inviting him to discuss the situation. However, Pablo Casado, spokesman for the governing Popular Party (PP), said that Mr Rajoy “doesn’t have to meet with the speakers of regional parliaments and particularly so if they are proposing something illegal.”

In the report accompanying his decision not to issue the arrest warrant, Mr Llarena suggested that Mr Puigdemont had travelled to Denmark hoping to be arrested in order to make a political point ahead of what is likely to be a highly charged investiture debate.

The trip, the magistrate, noted, “seeks to ensure that the investigated individual can claim that his absence [from the Catalan parliament] is not due to his free decision as a fugitive from justice, but that it is the result of a situation that has been imposed on him”.